Cats hoping to come out stronger in games, avoid comebacks 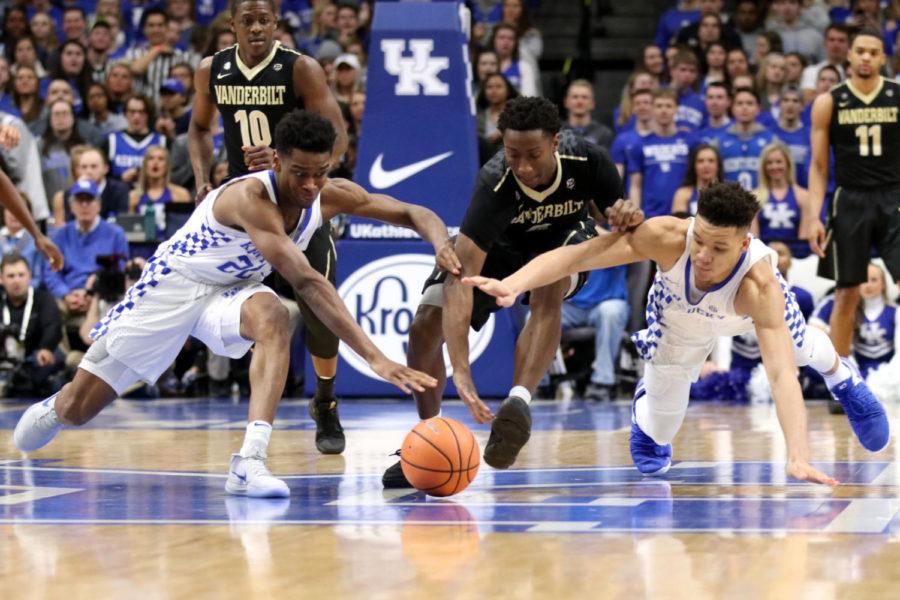 Shai Gilgeous-Alexander and Kevin Knox dive for the ball during the game against Vanderbilt on Tuesday, January 30, 2018 in Lexington, Ky. Kentucky won in overtime 83-81 | Photo by Chase Phillips | Staff

The 2017-2018 Kentucky basketball season has undoubtedly kept Big Blue Nation on its toes, and Tuesday night’s 83-81 overtime win against Vanderbilt was certainly no exception.

With a starting lineup full of freshmen, the young Cats have proven to be resilient enough down the stretch to come back and win games. However, Kentucky assistant coach Kenny Payne says his team needs to come out from the start and play more aggressive.

“The way we played that first half, tentative, not aggressive, not communicating on defense, defensive lapses, you’re going to get beat if you’re playing tournament basketball like that,” Payne said. “I think that the fact that we’re winning these games is important. So that shows there’s a will to win, but, my goodness, I wish it was a little easier,” Payne said.

Shai Gilgeous-Alexander, who dropped a career-high 30 points in Tuesday’s game, agreed that his team needs to come out much stronger than to eliminate games determined by the last second, or even overtime.

Gilgeous-Alexander said he doesn’t think his team put together the fight in the beginning of the game like they needed to.

“I hate being down… we just got to figure out how to put a full 40 (minutes) together, and once we do, we’ll definitely be special,” Gilgeous-Alexander said.

After the Cats came back from being down 14 against Vanderbilt and an even higher deficit, 17, against then No. 7 West Virginia last Saturday, Kentucky point guard Quade Green called himself and his teammates “some fighters,” and said they do whatever they have to do to win.

“I like taking big shots, and I had my Kobes on too, so I felt like Mamba for a little bit,” Green said of his game-winning layup with five seconds left in overtime.

Payne had a lot to say about adversity and how Kentucky’s coaching staff his been really trying to push mental and physical toughness on his players.

And that’s exactly what the Cats did against fellow SEC opponent Vanderbilt. Catch Kentucky back in action on Saturday at 2 p.m. at Missouri.