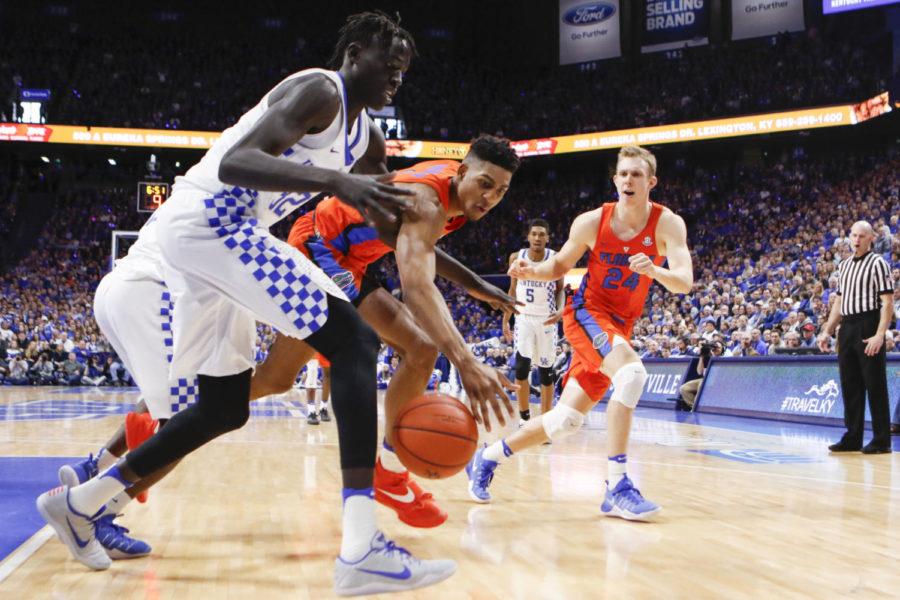 Kentucky Wildcats forward Wenyen Gabriel goes after a loose ball during a game against the Florida Gators on Saturday, February 25, 2017 in Lexington, Ky. Kentucky won the game 76-66. Photo by Carter Gossett | Staff

ESPN College GameDay returns to Lexington for the second straight season on Saturday for the matchup between the Kentucky Wildcats (14-4, 5-2) and the Florida Gators (13-5, 5-1).

GameDay has featured a matchup between these two teams seven times already, and only Duke versus North Carolina has been featured more. The Gators have won six of the seven matchups against the Wildcats on GameDay; however, five of the matchups have been on their home floor.

Kentucky’s most recent game, a 76-68 loss to South Carolina, showed the first glimpse of highly-touted freshman Jarred Vanderbilt, who missed the first 17 games of the season with a left-foot injury. Kentucky fans hope that he will provide a spark of toughness that this young Kentucky team has been lacking all season.

Head coach John Calipari is easing Vanderbilt into the rotation, restricting him to limited minutes. Even in his 14 minutes of action against South Carolina, Vanderbilt showed flashes of what he can do: grab rebounds, push the ball up the floor and find his teammates.

One Cat that Florida head coach Mike White is familiar with is Shai Gilgeous-Alexander.

When Gilgeous-Alexander was a junior in high school, he was a three-star recruit. In November 2015, Gilgeous-Alexander committed to the Gators. Over the course of the next year, his skills developed at a much faster rate than anticipated, turning him into a top-50 recruit.

By November 2016, he had flipped his commitment to Kentucky.

This season, Gilgeous-Alexander is averaging 12.0 points, 3.7 rebounds and 4.2 assists per game.

The Gators are led by senior point guard Chris Chiozza. Chiozza is averaging 12.3 points, 4.2 rebounds and 5.9 assists per game. Chiozza hit a game-winning layup with 0.1 seconds left against Missouri after getting a steal. He is also the only Gator since 1996 to post a 25-point, 10-assist game in the win against Gonzaga.

The game will be broadcast on ESPN and is set to tip-off at 8:15 p.m. on Saturday at Rupp Arena. ESPN’s Basketball Power Index favors the Cats, giving them a 62.4 percent chance to win as of Monday night.