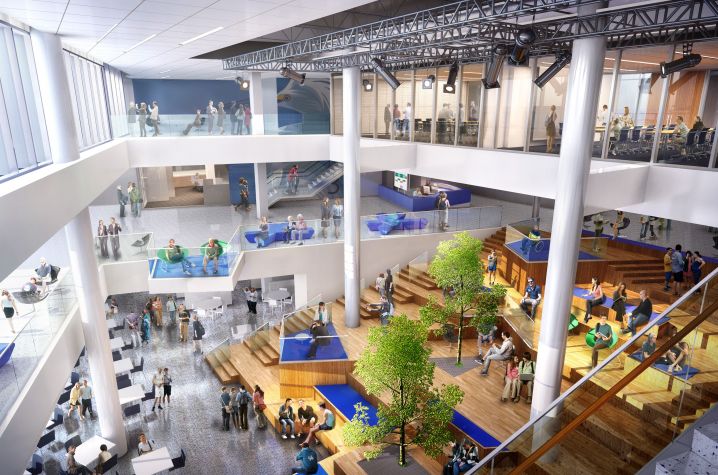 The Social Staircase is a cascade of platforms and sitting areas that will function as the Student Center’s main hangout and study spot.

Back before the year 2015 BC (before construction), in the ancient days of UK there was a familiar phrase floating around the old campus:

“Meet me at the student center.”

According to many seniors and graduate students who remember the old student center, UK’s campus has been lacking that central social hub where students can congregate and hang out.

University of Louisville junior, Katie Kalinyak, said that she often goes to the Student Activities Center on U of L’s campus for lunch. “Most people just call it the SAC,” Kalinyak said.

“Meet me at the SAC is a common thing we say here.”

John Herbst, the executive director of the Student Center, said UK hopes to do a soft opening of most of the student center by late April.

Obviously with the weather and other possibilities, that opening date could be delayed, Herbst said.

The Harris Ballroom, the original ballroom from the late 1930’s, and the Blue Box Theater, essentially a 250-seat black box theater, will likely not open in the spring.

With thousands of square feet of student office space, a flashy retail dining center, state-of-the-art entertainment options and countless study and hangout spots, the Student Center hopes to be the central hub of UK culture.

“The design team was very intentional about what would augment a sense of community,” Herbst said.

Here are some of the highlights:

Many north campus students will be over-joyed to find out that their walk to class will likely be shortened as the quickest way to Whitehall will be straight through the heart of the Student Center.

A commuting student would probably see other students enjoying themselves in one of the many grassy terraces, rooftop gardens or perhaps huddled around an outdoor fireplace in the colder months.

The botanical gardens will flank the south side of the center and will extend over to near where Bowman’s Den is now.

Large glass windows and skylights dominate the center’s exterior so passing students will probably notice that many rooms are brightened by natural light.

“One of the things we heard from the students,” Herbst said, “is we want it to be a transparent transition to the outdoors.”

With 4K laser projection and surround sound so good that you “feel” the movie, Herbst said the cinema will be the most technologically advanced in the state.

Because of the high-tech cinema and a steady student audience, large film studios like Warner Brothers are even considering doing early-showings of upcoming movies, Herbst said.

The Student Center Programming’s Late Night Film series will have a new home in the theater.

Every restaurant in Bowman’s Den—plus a few new ones—will be moved to the new center.

An Auntie Anne’s Pretzels is confirmed to be on the second floor, and a full-service Starbucks will operate out of the bookstore.

A cascade of platforms and sitting areas that resembles a sort of modernist rice terrace will function as the center’s main hangout or study spot. The Gatton College of Business has a similar staircase.

The space will function as both a walkway and social area—hence the name. Herbst said that along with ample seating there will be power outlets “every three feet” and a new wildcat statue designed by the same artist who made the statue just outside of Bowman’s Den.

This staircase may also be one the most eye-catching spaces in the building as the architects designed it to resemble the way water carves Kentucky limestone.

Along with necessary textbooks and books by UK faculty, the store will house a full-service Starbucks, a Nike store and an Apple store.

The Alumni Gym will become the Johnson Center of north campus—sans rock wall and basketball courts.

The gym, which will be completely lighted by a large skylight and tall glass windows, features plenty of free weights and 190 pieces of cardio equipment. A Fitness Lab, where students can make appointments with personal trainers, will also be available.

There will be men’s, women’s and gender-inclusive locker rooms.

The new Grand Ballroom, which will likely be one of the most heavily-utilized spaces in the center, will be able to seat between 800-1,000 people at round tables.

The Grand Ballroom is one of two ballrooms at the center, but the older Harris Ballroom will likely not open in the spring.

Thousands of square feet of open office space will be opened specifically for student-run organizations.

Some of this will always be occupied by groups like Student Government and the Student Activities Board. But, Herbst said that much of the space will be made available to active student groups on a year-to-year basis.

The Cat’s Den Underground, which currently resides in the basement of the Blazer Dining building, will be getting some new digs on the bottom floor of the Student Center.

Pool tables and a large stage for live music acts and passing comedians will be some of the main draws for the den.

WRFL, UK’s student radio station, will be getting a new studio right next to the Cat’s Den. Herbst said this was done intentionally. Now when WRFL is streaming a live band, the band can set up on the Cat’s Den stage and the station can livestream from there.

• A new Welcome Center with a touchscreen wall