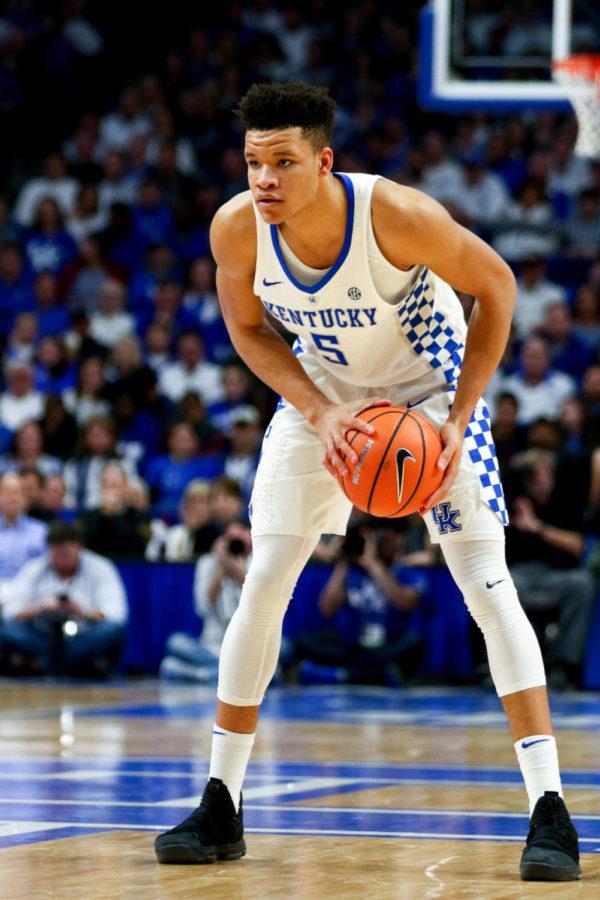 The Kentucky basketball team, which has played four of its first five SEC games on the road, wasn’t able to achieve its third road win of the season, as the Cars fell at South Carolina on Tuesday night 76-68.

Kevin Knox was UK’s leading scorer in the loss, finishing with 21 points and 8 rebounds. This was Knox’s first 20-point game since Dec. 16 against Virginia Tech.

After opening up a 14-point lead at the 13:25 mark in the second half, Kentucky would allow South Carolina to go on a 27-13 run over a 9:08 stretch to tie the game with 4:02 remaining. Kentucky’s offense started the half hot, which helped build the lead, but foul trouble made the Cats vulnerable, and South Carolina took advantage.

Sacha Killeya-Jones, Shai Gilgeous-Alexander, Hamidou Diallo and Wenyen Gabriel all had collected four fouls with 9:18 remaining in the game. It took just 1:57 more for Gabriel to foul out, which at that point Kentucky’s lead at that point was down to four.

Nick Richards would join Gabriel on the bench with 2:47 remaining after he would foul out himself. Maik Kotsar would knock down two free throws as a result of the foul, which would give South Carolina a four-point lead, its largest of the second half at that time.

On Kentucky’s next possession, Gilgeous-Alexander would miss a three, and Diallo would intentionally foul Chris Silva, who knocked down one free throw on the other end to virtually end the game.

Silva would tie his career high with 27 points while knocking down 9-13 free throws.

As a result of the loss, Kentucky collected its fourth loss of the season, two of which have come in SEC play. The loss also breaks a four-game winning streak Kentucky had over South Carolina.

Up next for Kentucky is a showdown against conference-rival Florida. That game is set to tipoff at 8:15 p.m. at Rupp Arena on Jan. 20.