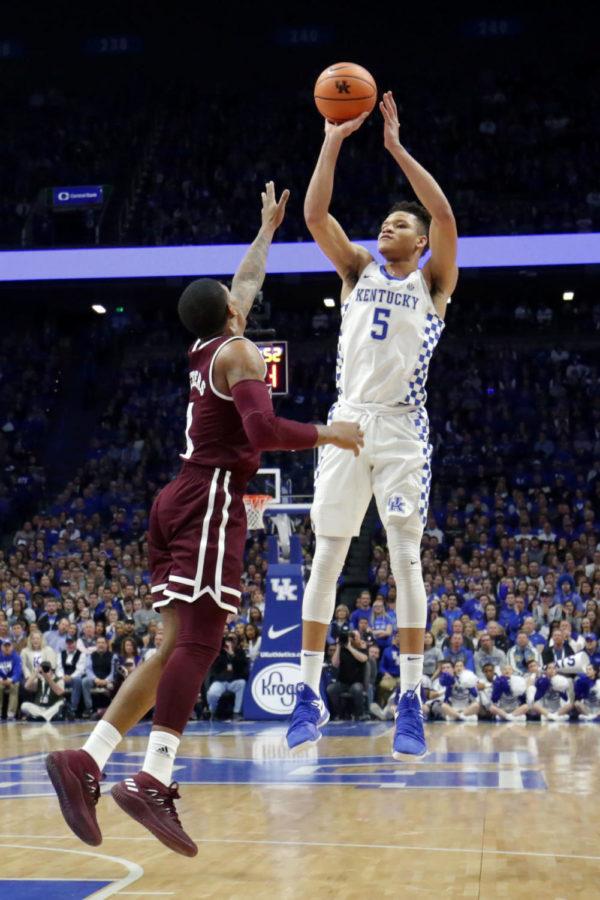 A lot of late-game situations at Rupp Arena have had fans on the edge of their seats this season, but Tuesday’s game against Mississippi State was different.

Once Kentucky had an eight-point advantage with 2:04 remaining, the lead never got any smaller as the Cats cruised to their first double-digit win of SEC play.

Kentucky has shown a tendency to let opponents back into the game near the end of regulation, but against the Bulldogs, the Cats’ offense was much more efficient, which allowed them to keep their lead.

“We ground it out, we got the ball where we wanted to, we made layups, and we made free throws,” said head coach John Calipari after the game.

That does not mean the Cats were mistake-free, as the Bulldogs did come within five points of UK’s lead when Quade Green fouled Tyson Carter on a three-point attempt. Carter made the three plus the free throw, completing the four-point play.

“That drives me crazy because that means you’re just not thinking basketball for your team,” Calipari said. “That’s not acceptable right now with where we are, just trying to win game.”

Other than that mistake, the Cats were near flawless down the stretch, as they finished the game on a 10-2 run following Carter’s four-point play in the final 2:47.

The Cats also did not commit a turnover in the final 6:15 of the game, which was something that helped the offense get into its rhythm.

A win like this can do a lot for a bunch of freshmen, especially heading into arguably their toughest opponent of the year defensively at West Virginia.

In order to win in Morgantown, West Virginia, they will need to limit their turnovers, which is something the Mountaineers are famous for doing. However, tonight’s win was about getting back on track, and not allowing an opponent to get back in the game late helped accomplish that.

“Losing two in a row was really hard for us, so it was good to come back and win one at home, and I think all of us are happy,” Knox said. “Hopefully we keep this momentum going at West Virginia.