John Calipari insists the UK basketball team is ‘fine,’ and he may be right 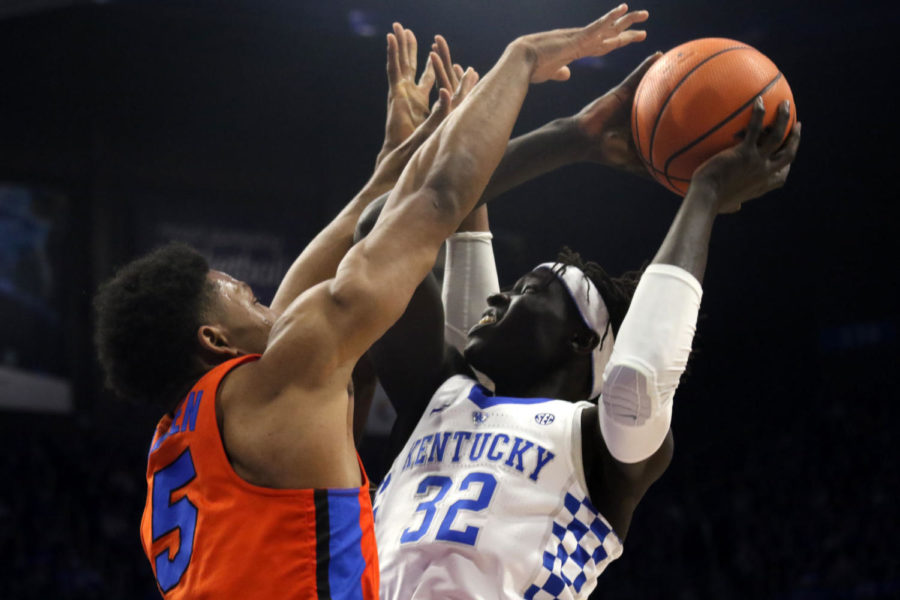 Sophomore forward Wenyen Gabriel hits a layup over defenders during the game against Florida on Saturday, January 20, 2018 in Lexington, Ky. Florida won the game 66-64. Photo by Hunter Mitchell.

UK basketball may have taken a heartbreaking 64-66 loss to conference rival Florida, but the postgame press conference for head coach John Calipari was one of the most positive of the season.

“Let me say this, and start by saying this: We’re going to be fine,” Calipari said. “What I saw today, [Florida] is one of the best offensive teams in the country. We held them to 33 percent and 20 percent from the three-point line.”

Calipari is correct. The Gators average 82 points per game, tied for 36th in the nation. This is the lowest the Gators have scored since their 59-65 loss to Loyola-Chicago on Dec. 6, 2017. However, not every Cat is thrilled with the effort put forth by the team.

“What do you mean ‘it’s fine’? I mean, it’s tough taking two losses like this,” said sophomore forward Wenyen Gabriel. “We’re going to be good, it’s not the end of the world. We’re going to win some more games, obviously. Basketball has its ups and downs, we’re going to obviously start winning again.”

Gabriel finished the game with 10 points and seven rebounds, only missing two shots on the night. He scored seven of his points in the span of less than two minutes, and his last three was made with less than 30 seconds to go in the game to bring the Cats within two.

Calipari’s insistence is that the team is fine, and I’d be inclined to agree with him. In January of 2017, the De’Aaron Fox-led Cats lost their third and fourth games of the season in a row.

The first was an away loss to the Tennessee Volunteers, who forced Malik Monk to shoot 3-13 from behind the three-point line while holding UK’s bench to four points.

The second was when College GameDay came to Rupp Arena for UK’s game against Josh Jackson’s Kansas team, which took down the Cats 79-73.

“I know there’s some people out there that will be panicked and all this,” Calipari said. “Be panicked. I’m glad I’m not sitting with you because I am fine.”