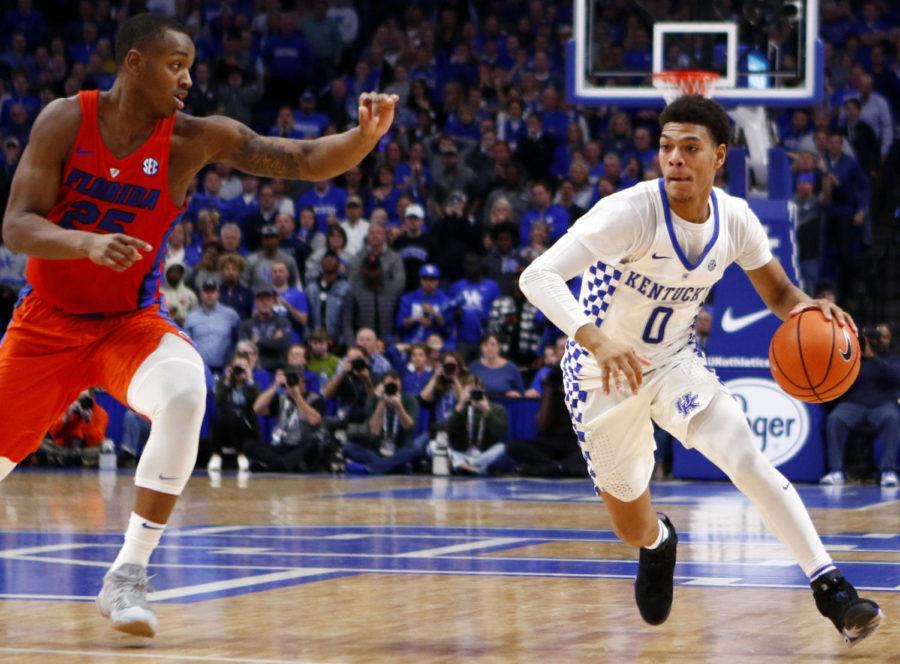 Quade Green #0 of the Kentucky Wildcats drives down the lane during the game against Florida Saturday, January 20, 2018 in Lexington, Ky. Florida defeated Kentucky 66-64. Photo by Carter Gossett | Staff

In the 66-64 loss against Florida on Saturday night, UK went 4-17 from behind the three-point line.

Head coach John Calipari said that he wished his team had made a few more threes and that it could have possibly changed the end result of the game.

“I would have liked for us to have made six, two more,” Calipari said. “Quade (Green) being out has affected us. Kevin Knox hasn’t been shooting the ball particularly well.”

In the first half, the Cats were ice cold from behind the arch, going 0-for-6. It wasn’t until 5:35 left in the second half that three point shots start to fall.

Recap: Last second threes too late as Cats fall to the Gators

Sophomore forward Wenyen Gabriel made a much needed three-point shot with 27 seconds left to go in the second half, closing the gap on Florida’s lead.

“It just started to fall, it felt like we needed some shots late in the game,” Gabriel said. “We can’t go games where we just make one three.”

In the past two games, the Cats have gone 5-for-28 from the three point line. Calipari said his team has missed Green being able to knock down those crucial three point shots.

With 34 seconds left in the game, freshman forward Kevin Knox made his first three of the game when he banked a shot in.

Gabriel reassured that perimeter shooting will come for this team, but it’s not something they have been focusing on.

“We can shoot the ball, it just hasn’t been our emphasis right now,” Gabriel said. “Once our offense starts flowing better, you’re going to see the three point start falling.”

Calipari explained that his team hasn’t been focusing on perimeter shooting because his players are able to score in the paint.

If this current three point drought continues for UK, Gabriel said that they won’t win games.

“You can’t win games like that, it’s hard to make up the extra points,” Gabriel said. “We got to work on perimeter shooting.”