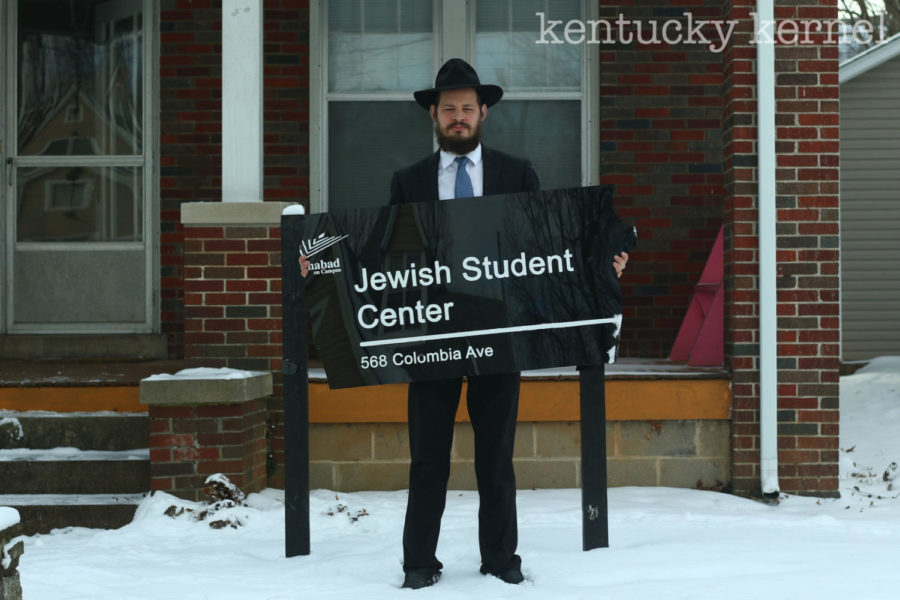 Rabbi Shlomo Litvin of the Chabad of the Bluegrass holds the broken Jewish Student Center sign in front of the posts the sign was previously mounted on Wednesday, January 17, 2018 in Lexington, Kentucky. Photo by Arden Barnes | Staff

Rabbi Shlomo Litvin and his daughter sat on the Jewish Student Center sign and sledded down the slope in front of William T. Young Library.

It was his two-year-old daughter’s first time sledding. Their sled of choice, while others around them were sledding on pizza pans and anything else they could find, had a deeper meaning of “love and joy.”

Less than two days before, the sign had stood in front of the Jewish Student Center building, not far from Willy T.

But between 1:30 and 2 a.m. on Monday, Jan. 15, Litvin witnessed a young adult “tackle” the sign in an act of alleged vandalism.

Litvin said he was working in his office at the center— because he works “around the clock” — when he heard noise outside.

“It’s not that rare on a university campus to hear kids yelling at 2 a.m., so at first I wasn’t alarmed,” he said. “And then I heard, ‘Look at the Jews,’ which perked my ear.”

Litvin then opened his window shade and looked outside to see a group of five or six individuals, including the one he then saw damage the sign. Then he heard male voices yell “Heil Hitler,” “Get the Jews, kill the Jews” and other similar lines.

“I became alarmed,” he said, so he turned on the lights and called the police and the center’s security.

The group then ran up the block, where UK Police saw them taking pictures with the sign. UKPD’s lights scared off the group, and officers recovered the sign.

UKPD returned the sign to the Jewish Student Center as Lexington Police arrived in response to his call, Litvin said.

Lexington Police assigned a detective to the case on Tuesday, said Sergeant Jervis Middleton. Middleton said the report filed by Litvin was a Criminal Mischief report.

“The Lexington Police Department has been excellent,” Litvin said.

It was too dark for Litvin to see the suspects well, but video surveillance of the incident has been turned over to the police.

Litvin said he got the impression that this will be handled as a hate crime in addition to vandalism.

The Jewish Student Center has only been on UK’s campus for two years, and this is the second time it’s been vandalized, Litvin said. The Jewish organization Chabad, which has between 200 and 300 students at UK, had been vandalized once more before the center was established.

Litvin said this incident came amid a rise of anti-Semitism, both nationally and at UK.

Litvin said that because of the snow day, the response among the students has been a little slow. But Litvin remembered a quote by Martin Luther King Jr. during the week of his birthday: “Hate cannot drive out hate; only love can do that.”

That sentiment is why he used the sign as a sled.

So he explained to the 60 or 70 nearby sledders why they were using the sign as a sled, then he and his daughter made one trip down the hill on the broken sign.

“Then we switched to a better sled,” he said. “The importance was there that hate can never beat love— love is too powerful.”

UK spokesperson Jay Blanton said UK does not yet have all the details of what occurred at the Jewish Student Center because Lexington Police are just beginning to investigate.

“However, we can never — and will never — condone the use of vile, hateful speech targeted at anyone on our campus or in our community, regardless of their identity or perspective,” Blanton said. “Nor can we tolerate the destruction of property.”

The Muslim Student Association of UK released a statement in response to the incident.

“During this trying time, the Muslim Student Association stands in solidarity with our Jewish brothers and sisters. Such hateful acts are not acceptable and it is heartbreaking to see them occur on our campus,” the statement said. “We emulate the Prophet’s example by supporting people of other faiths and are available for support if anyone wants to reach out.”

Litvin said that Chabad and the Jewish Student Center will “keep on doing what we’re doing.” Previously scheduled events will still be held, including classes on Wednesdays and services on Fridays. He said the center hopes to have an event in the coming weeks that has “broad university and community participation.”

“If anything, this only strengthens our resolve and the need for us to be here, with our message of tolerance, of love and of what Judaism is,” he said.

The Chabad group on campus is part of a global organization, which is the largest Jewish organization in the world.  After this incident, Litvin remembered something Chabad founder Rebbe Schneerson said in a conversation he had with Israel’s ambassador to the United Nations at the time.

“(Scheerson) reminded him that if he feels outnumbered and if he feels put upon, that in a hall of perfect darkness, one small candle is seen even more so,” he said. “That light is more precious than the dark.”