It is time to trust Calipari and his team 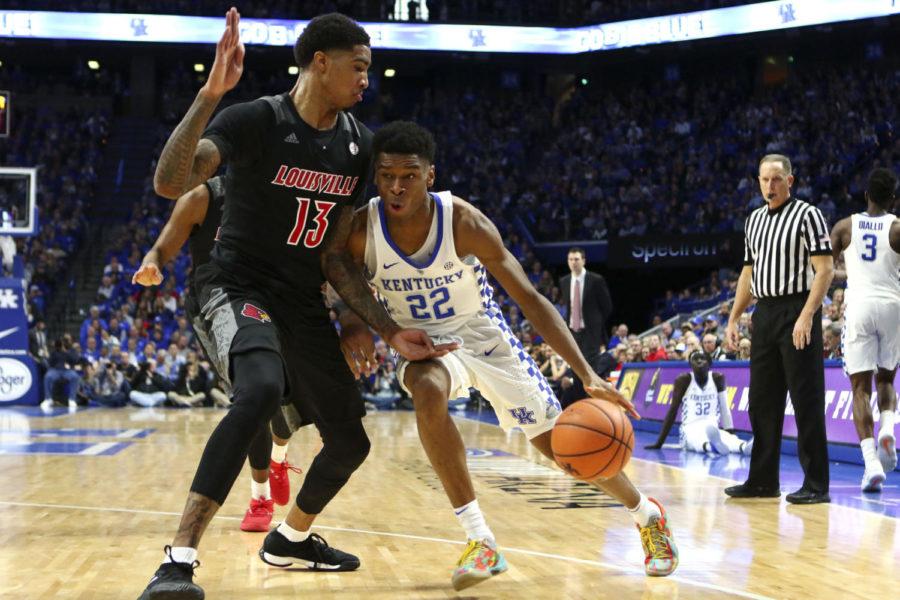 Shai Gilgeous-Alexander #22 of the Kentucky Wildcats drives down the base-line during the game against Louisville Friday, December 29, 2017 in Lexington, Ky. Kentucky defeated Louisville 90-61. Photo by Carter Gossett | Staff

The team that the Big Blue Nation saw against Tennessee and the team that faced Louisville are shockingly the same team.

Let’s go back to 2014, we started all freshmen, and our scoring came from freshmen. That team— behind James Young, Julius Randle and the Harrison Twins— gave us the same headaches we see today. Shai Gilgeous-Alexander and Quade Green are the Twins, Kevin Knox is James Young, and PJ Washington is Julius Randle. 2014 was the best turn around season in a long time, but what are some things the current team should improve upon now?

First off, let’s give this team credit. The first half of the Tennessee game was by far what fans expected: getting into those passing lanes, opening the floor up and relying on the postman to make the plays. Washington was the primary source of a lot of offense in the first half, not only was he backing down UT’s big men and banking those shots but he opened up three-point shots that UK wasn’t getting most of the time.

Just remember, Wenyen Gabriel was on fire in the first half by going 3-3 behind the arc, and most of them came off on assists and one from Tennessee’s defense crowding the paint and Washington doing the simple kick-out. That is something we should see from now on, especially in conference play. Relying on the three is not what you want to be doing in March due to hitting a slump like the West Virginia Elite 8 game in 2010.

Secondly, using the Alexander, Green, Washington, Gabriel, Richards lineup is the way to go during the last ten minutes, but this leaves out Kevin Knox. If you take out the LSU and UCLA game and possibly Kansas, Knox hasn’t provided what we thought. Again, he relied on the three during the UT game and went 0-5 from the three-point line.

Maybe we will see a James Young turnaround happen during the tournament time but for now, Knox on the bench is a positive. His defense also is what kills us. He forgets coverage in the zone package and never has his hands up.

On the other side, having Alexander with the ball and Green being the off-ball guard opens up a lot for this team. At the beginning of the season, Green having the ball was good, but his off-ball movement has set him apart since the Virginia Tech game. Getting Green the ball secondly as Gilgeous-Alexander brings it up helps significantly because the shot clock can be taken advantage of with Alexander’s grit to get to the cup. Lastly, we cannot forget Green’s two-dribble elbow jumper. It looks so right, it’s automatic in a late shot clock situation.

Lastly, we go to defense. This leads back to the youngest team in the nation thing. These packages aren’t the AAU stuff they’ve seen. On the other hand, the alertness and tenacity isn’t there every possession. Just look back on Calapari’s successful teams. 2015 and 2012 had some of the best defense that has happened in a Kentucky uniform. Both teams were defensive driven and knew when there was a block, was an opportunity to run and get easy baskets.

This young team has seen spurts of this like the Louisville game and not to mention the Georgia game, which we almost lost if it wasn’t for our defense. This was also another thing that was tweaked in 2014. Their defense in the SEC tournament was so much better, it didn’t look like the same team. Expect more poise on the defensive side and more hands up.

This team is something else. It is a work in progress and will be until the end of the season. This is a team that has the poise to go far in the tournament if some adjustment happens. Even with the loss against Tennessee, Kentucky looks really good for another run to San Antonio. Remember, trust Calapari in that coaching staff. They prove us wrong every time.