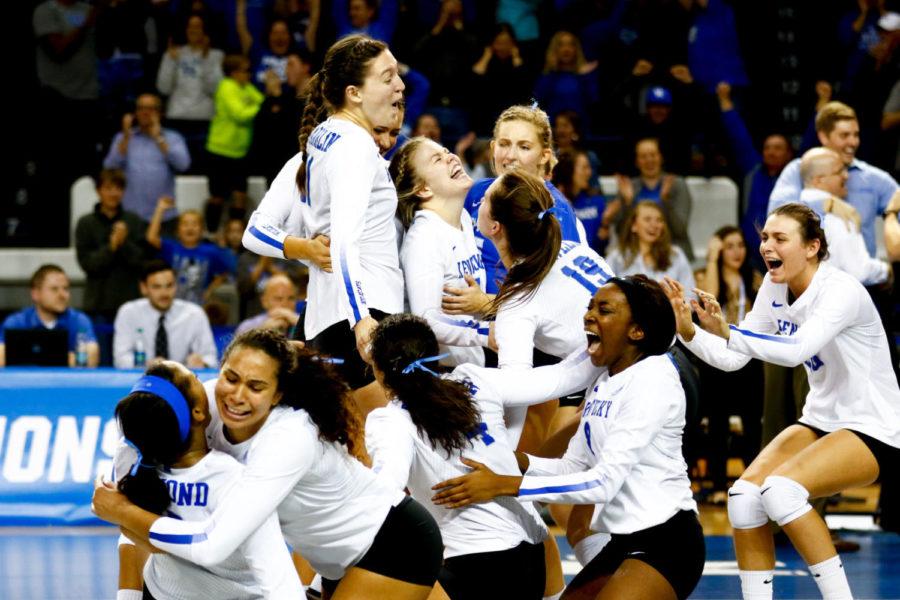 The Kentucky volleyball team celebrates after their victory against WKU during the second round of the NCAA tournament on Saturday, December 2, 2017 in Lexington, Kentucky. UK won 3-2. Photo by Arden Barnes | Staff

The fall semester at UK has been a wild ride for Kentucky fans.

There has been action from football, basketball, volleyball, soccer, rifle, swimming & diving, track & field, cross country, golf, gymnastics and tennis. While all sports had their shining moments, here are the ones that really stuck out.

Quickley, a five-star recruit, committed to Kentucky back in September to kick off John Calipari’s 2018 recruiting class. Quickley is the number-three point-guard ranked on ESPN’s recruiting service and chose Kentucky over Kansas and Miami.

Quickley hopes to be next in line in Calipari’s comprehensive list of point guards, and has already had playing time under Calipari in Cairo, Egypt, on USA Basketball’s FIBA U19 World Cup team this past summer.

Head coach Craig Skinner has had Kentucky volleyball rolling this season, and the team grabbed it’s highest seed ever in the NCAA Tournament with the fourth seed. The Cats also claimed their sixth SEC championship, their first one since 1988.

Kentucky finished the regular season with a 26-3 record, including a road win over Florida. The top-four seed earned the Cats the right to play up through the NCAA Regional rounds in Lexington, which is something that’s never been done before.

Read: UK advances to Elite 8 after comeback win over BYU

Snell had another monster season for the UK football team, helping lead them to a 7-5 record.

Snell was able to rush for 18 touchdowns this season, another school record. Snell broke the sophomore record at UK for rushing yards in a season with 1,318 yards. In the season finale against Louisville, Snell rushed for a career-high 211 yards, the record for most yards against Louisville.

After being down two sets to zero in the second round of NCAA Tournament on their home floor against in-state opponent Western Kentucky, UK was able to pull out a five-set victory to advance to the Sweet 16.

Combining all five sets, Kentucky outscored the Hilltoppers by the slimmest of margins: one point. Sophomore Leah Edmond led the Cats with 22 kills, eight digs, four blocks, two assists and an ace in the victory.

Read: Cats comeback against WKU to advance to Sweet 16

Against Tennessee, Stephen Johnson did what he seemed to do nearly every week of his career at UK; lead the Cats to victory in heroic, come-from-behind fashion.

Down 26-21 with 4:43 left in the game, Johnson, who had to be taken to the locker room in the third quarter with a shoulder injury, and the Cats got the ball and drove down to the end zone to beat the Volunteers for the second time in 33 years.

Snell was terrific for much of the game, rushing for 180 yards and three touchdowns, including 33 yards on the final drive. Stephen Johnson was able to scramble it in from 11 yards out with 33 seconds remaining to lift the Cats to a 29-26 win against the Vols.