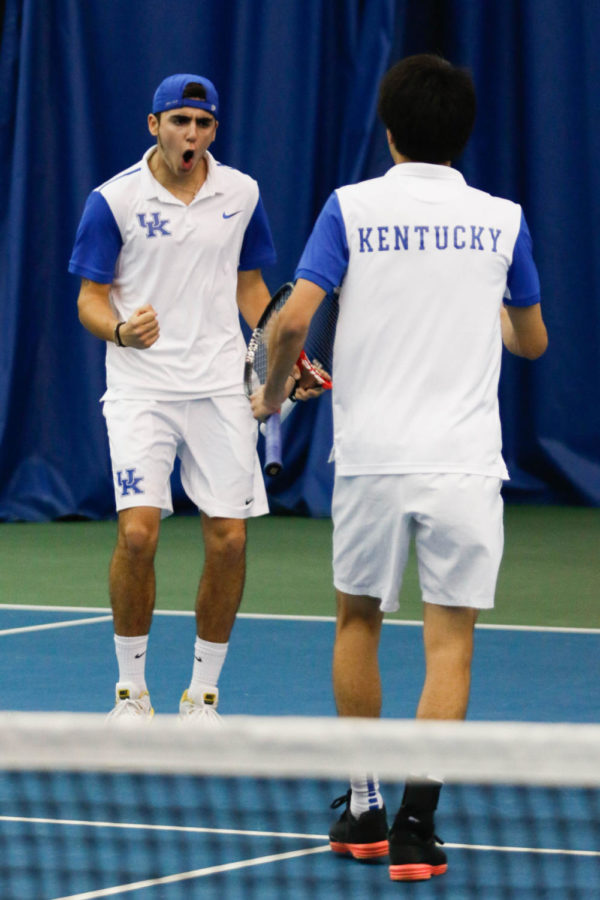 Enzo Wallart celebrates with Ryotaro Matsumura during the match against the Arkansas Razorbacks on Friday, March 4, 2016 in Lexington, Ky. Kentucky won the match 5-2. Photo by Hunter Mitchell | Staff

UK men’s tennis started this season off with some impressive play. The team hosted a double-header on Friday, sweeping NKU and EKU 7-0.

First, the Wildcats gave NKU their first match of the season. Starting with doubles, NKU’s Felipe Hidalgo and Jorge Rodriguez had to bring out all the passion they had against UK’s Cesar Bourgois and Enzo Wallart. Wallart and Bourgois won the first and only set 6-1.

That wasn’t the only doubles victory for the Cats. Senior and nationally ranked No. 77 singles player, Trey Yates teamed up with another senior, Gus Benson in a set opposing NKU’s Chris Murray and Andrew Niehaus. In this set, UK came out on top once again with a score of 6-0. The Cats finished the doubles portion of the match with 3 wins, giving them a point in the overall competition.

The first singles winner of the day was junior Austin Hussey. Hussey played defeated Rodriguez 6-0, 6-1. Other winners among the Cats were freshman Kento Yamada, senior Jake Stefanik and sophomores Alex Dominguez and Bourgois.

When asked about being No. 33 Matsumura said, “My goal is to be in the top 10, so this rank isn’t a major accomplishment.”

Matsumura said that the most important factor of each game is hitting through first serves.

Doubles play in the second match of the day was even more interesting as EKU was coming off a loss to Depaul. EKU junior Guillem Sanchis and freshman Carlos Dodero put up some tough play against Trey Yates and Gus Benson. Unfortunately for the Colonels, Yates and Benson came out tougher this time and won the set 7-6. Other doubles winners for the Cats were Bourgois/Wallart and Hussey/Stefanik.

The start of singles play against EKU seemed very exciting with Wallart on court one, Matsumura on two, Yates on three and Benson on court four. The Colonels wanted to redeem themselves in singles play, but the Wildcats wouldn’t allow it.

Wallart held his own ground, winning 6-3, 6-2 against EKU’s Ramon Flymen, Matsumura racked up another win 6-2, 6-1 and right after came more wins from Yates and Benson. Yamata succeeded again for the day 6-1, 6-1 and Hussey finished off the singles play for the day with one more victory for the Cats.

Next up, the Cats will face Notre Dame in South Bend, Indiana, on Jan. 21.