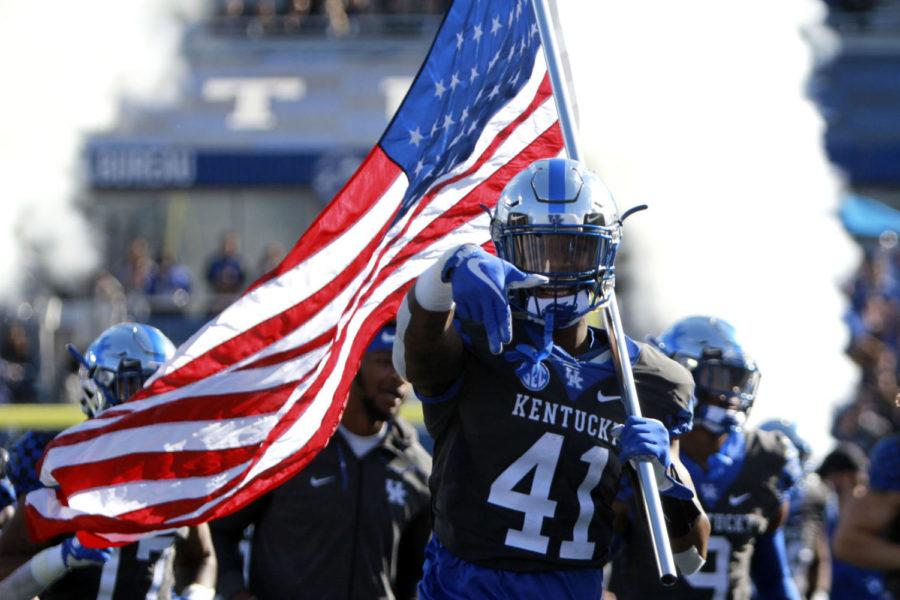 Kentucky Wildcats linebacker Josh Allen (41) runs onto the field pointing his hand with the 'L down' before the game against Louisville on Saturday, November 25, 2017 in Lexington, Ky. Photo by Carter Gossett | Staff

One thing in particular helped Josh Allen decide to come back to Kentucky for his senior season instead of pursuing his NFL dreams.

“Just from him being here made the decision for me, I couldn’t leave him,” Allen said in a press conference on Thursday.

At that point, Allen hadn’t made a decision on his future football plans, as he cited he just wanted to spend time with his son.

After spending time with Wesley and thinking about what’s smart for his future, Allen knew where he wanted to play football next season.

“It changed everything once he came, that’s another way it humbled me,” Allen said. “Now everything I do affects him now.”

Allen described the process of being evaluated by NFL scouts as humbling as well. Allen first received national attention in the middle of the 2017 season when he was amongst the leaders in sacks in the SEC.

Allen’s success brought first-round hype surrounding the edge rusher, and many thought he would leave in the offseason because of Allen’s potential.

“Once you read everything, you see first round, second round, you been thinking about it since we were young, since we children,” Allen said. “I grew up wanting to play in the league, and it was just like I can play.”

However, a dip in production late in the season caused Allen to fall in some of the mock draft boards. Allen got evaluations from NFL scouts, and his grade, plus the birth of his son, was enough to convince him he needed one more season in Lexington.

Despite delaying his dream another year, Allen still enjoyed the process of being evaluated by the NFL.

“It was stressful at times but it was also humbling,” Allen said. “Just for me to be at that standpoint that I can choose just to go to the NFL or come back, it was just humbling.”

Allen knows his time will come eventually, and he said he plans to work hard in the offseason to increase his draft stock, and also do the best he can to provide for his son.

Allen said he needed to improve on his strength and other things before taking the field in the fall. If the training goes well, he says fans can expect to see a full season of elite pass rushing instead of the half-season fans saw in 2017.

“I feel like next year, once I improve on my stamina, my strength, my speed and all that, I feel like I can last more, I can play more, be more healthy and come back stronger,” Allen said.