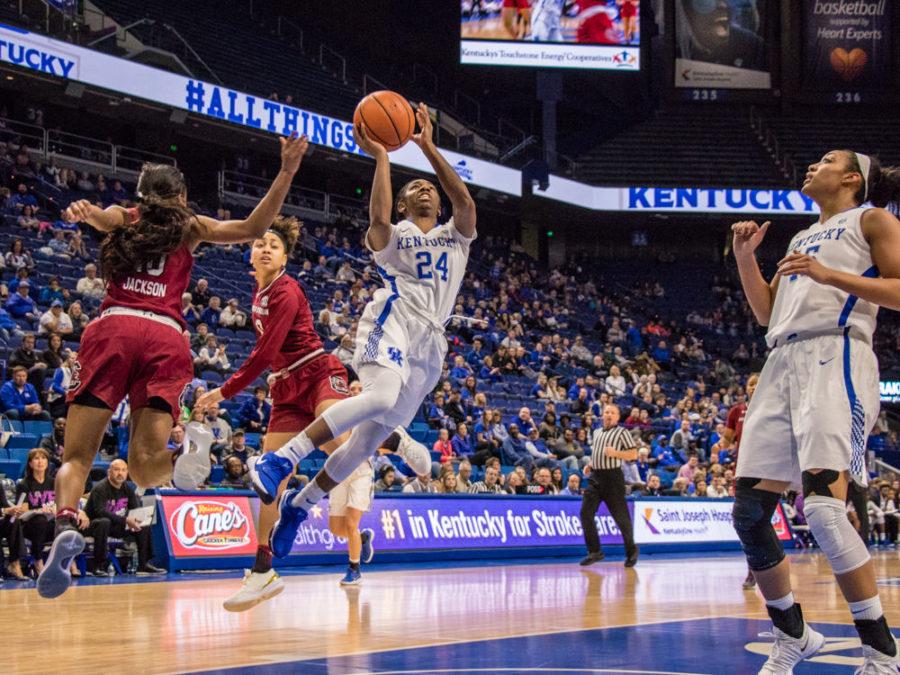 Junior guard Taylor Murray goes in for a score during the game against South Carolina on Sunday, January 21, 2018 in Lexington , Kentucky. South Carolina won the game 81-64. Photo By Genna Melendez | Staff

It was the Rebels’ 12th consecutive loss and the first win for UK since falling to South Carolina last Sunday.

The Cats were led by Maci Morris, who finished the game with 20 points. This is Morris’ fourth straight game leading the team in scoring and her fifth consecutive game of scoring at least 20 points.

Taylor Murray was back in her usual form, finishing with a double-double with 12 points and 10 assists.

Makenzie Cann looked as if she would be the star of the night, hitting her first three attempts from behind the arc, including two of the team’s first four field goals.

Murray got herself on the board with a layup as the first period ended to give Kentucky a 19-18 lead going into the second quarter.

That layup made it a 6-0 run for UK to end the quarter, which extended into an 18-2 run in the second quarter. The Rebels were able to cut it as close as six points after back-to-back threes by Madinah Muhammad, but the Cats answered with another 6-0 run while making six consecutive field goals.

Two free throws from freshman Dorie Harrison secured a 44-31 lead for the Cats going into halftime.

The second half started slowly for UK, only hitting one jump shot in the first three minutes. Kentucky got it going after that, going on a 7-0 run down to around 4:30 left in the quarter. The run led to Kentucky opening up a 16-point lead, the largest of the game.

The Rebels’ ended the quarter hitting five of their final seven field goal attempts, cutting the lead to 10 before heading into the final stanza.

Morris’ third quarter struggles continued into the final period. After going 1-3 from the field in the third, Morris missed her first three shots of the fourth.

It wasn’t just Morris struggling in the fourth, as neither team scored until Harrison made a layup at the 6:11 mark. Morris finally eclipsed 20 points with 2:50 left on a midrange jumper.

Kentucky’s next game is the regular season finale and senior day against second-ranked and undefeated Mississippi State at noon on Sunday at Memorial Coliseum. The game will be broadcast on ESPNU.