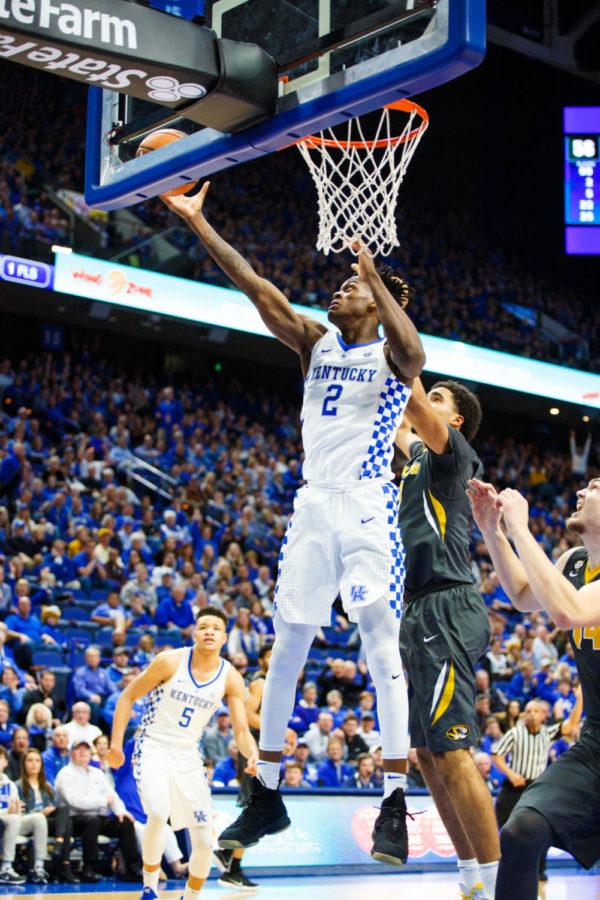 Kentucky freshman forward Jared Vanderbilt puts up a lay up in the game against Missouri on Saturday, February 24, 2018 in Lexington, Ky. The Wildcats won with a final score of 88-66. Photo by Jordan Prather | Staff

After averaging 11 points and 12 rebounds in the last two games, Kentucky freshman Jarred Vanderbilt was named SEC Freshman of the Week.

This is Vanderbilt’s first time winning an SEC weekly award, and the fourth time this season a UK player has been named the SEC’s Freshman of the Week. Vanderbilt’s biggest game of the two was arguably the most recent one against Missouri, when he scored 11 points and grabbed a career-high 15 rebounds.

Saturday’s game was also the first time in Vanderbilt’s career that he had a double-double.

In that game, Vanderbilt shot a perfect 4-4 from the floor in his 27 minutes of action, which was also a career high. Vanderbilt also added two assists and three blocks to go along with his final stat-line.

Since making his debut on Jan. 16 against South Carolina, Vanderbilt has averaged 5.9 points and 7.8 rebounds per game. Vanderbilt has been on a recent uptick,, however, scoring at least 11 points and grabbing nine rebounds in each of his last three games.

When Vanderbilt first returned from injury in January, many thought that the freshman was the missing piece Kentucky needed to get over the hump. With UK riding a three-game win streak that’s seen Vanderbilt play the best he’s been since his debut, those claims are starting to prove to be true.