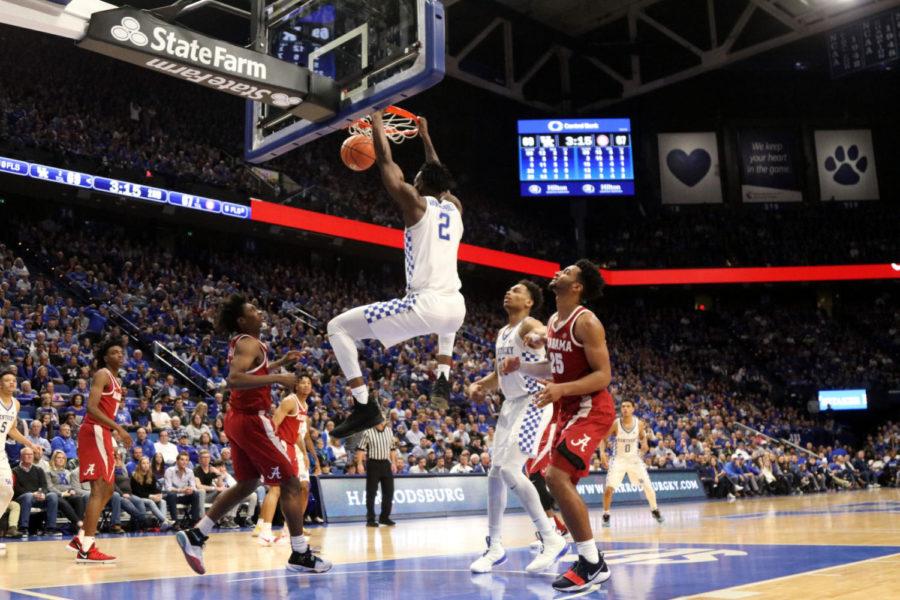 Jarred Vanderbilt goes up for a dunk during the game against Alabama on Saturday, February 17, 2018 in Lexington, Ky. Kentucky won 81-71. Photo by Chase Phillips | Staff

Earlier in the year, ESPN analyst Seth Greenberg compared Jarred Vanderbilt to Ben Simmons, and after Saturday’s win over Alabama, the freshman forward earned another comparison from his head coach.

Vanderbilt finished the game with career-high 11 points and nine rebounds, which led the team for the fourth time this season. This performance, and performances in the past, made John Calipari think of Dennis Rodman when thinking of Vanderbilt.

He can guard every position, he rebounds offensively, defensively he can pass, he’s skilled,” Calipari said of Vanderbilt.

Vanderbilt admitted he doesn’t know much about Rodman’s game, but he still understands the comparison.

“I think he just means the effort with rebounding and stuff like that; just impacting the game,” Vanderbilt said.

Vanderbilt made his biggest impact in the final 3:15 of the game, which UK finished on a 12-4 run. Vanderbilt scored six of his points during that span, including a tip-in that gave UK a seven-point lead with 1:26 remaining.

“I saw a couple of them drop, that obviously boosts your confidence,” Vanderbilt said of his performance. “I missed some early in the game but I just kept playing and they ended up falling late in the game.”

Podcast: The Defeat of Young Bull

When Vanderbilt first made his debut in mid-January, many believed that he was the missing piece Kentucky needed, and his addition would help the Cats turn the corner. Kentucky went on to lose six of nine games with Vanderbilt back, but the losses weren’t because of Vanderbilt’s effort.

Vanderbilt has proven to be a critical role player since returning from January, which is what the Cats needed from him before he debuted.

“Yes, and I know everybody talks about (Kevin) Knox and obviously (Shai Gilgeous-) Alexander and what they can do offensively, but in games like this you need a utility guy,” Alabama head coach Avery Johnson said of Vanderbilt after the game.

If Vanderbilt can be that utility guy, and add a handful of points here and there, that could be what Kentucky needs to push them out of their slump. The Cats showed flashes of what they could be in the win over Alabama, which has risen the confidence in this team since their four-game losing streak.

“If we play like this, we feel like we can beat anyone in the country,” P.J. Washington said. “We need to keep doing this in practice and eventually in the games. We’ll keep working on it every day.”