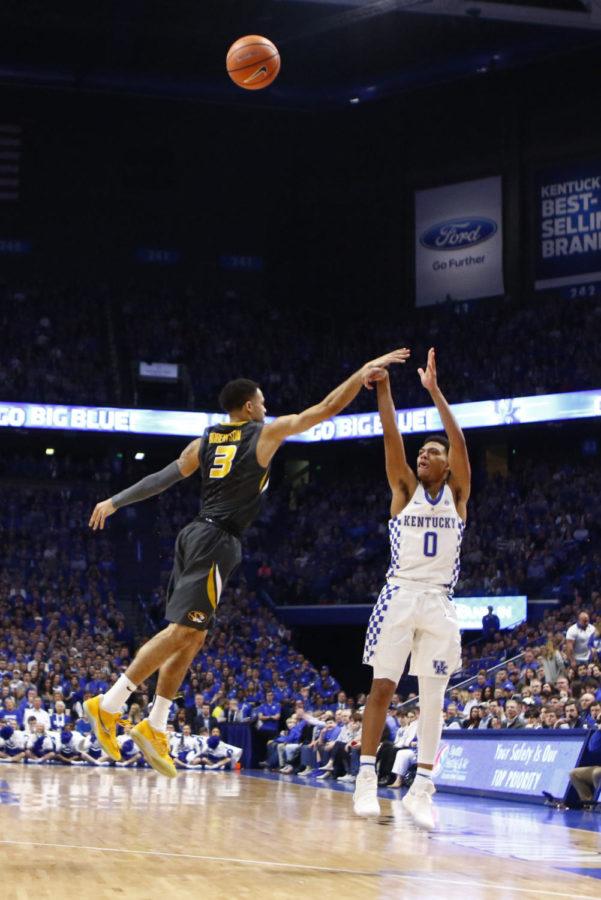 UK basketball continued to roll as they hosted Missouri on Saturday, defeating the Tigers 87-66. The game was a rematch of UK’s earlier 60-69 loss in Missouri’s arena on Feb. 3.

The Cats started hot and found it hard to cool down. They shot 56 percent from the field and 72 percent from deep in the first half, going the first 11:23 without a made two-point basket.

Unfortunately for the Cats, the Tigers were just as automatic from deep, as eight of the first ten baskets in the game for either team came from behind the three-point line.

Most notably of the group, however, was Jarred Vanderbilt. He finished with 11 points, 14 rebounds and three blocks. Vanderbilt posted career-highs in rebounds and blocks in the game.

Despite Missouri’s equally hot start, the Cats caught fire late in the half to open up a 12-point halftime lead. Before the break at the half, Vanderbilt had already grabbed 10 rebounds.

In the second half, the game was all Kentucky. The Cats outscored the Tigers 44-34 in the second stanza, dominating both sides of the ball. They would eventually open up a 25-point lead, the largest they’ve held over an SEC opponent all year.

The Cats continued their imposing stretch on the boards, outrebounding the Tigers 36-32 across the game. In their last three double-digit victories, the Cats have beat opponents on the glass by 38 total rebounds.

UK also moved the ball exceptionally well, assisting on 17 of their 28 made baskets. Their best passer of the game by far was Shai Gilgeous-Alexander, who posted a game-high eight assists.

This win gives UK three straight double-digit victories, something they hadn’t yet accomplished on the year. It also ties them for third in the SEC along with Arkansas, Mississippi State and Florida.

Next up for the Cats is their final home game of the season as they’ll host Ole Miss. The Rebels are currently last in the SEC with a 5-11 record in conference play. That game will be Feb. 28 at 7 p.m.