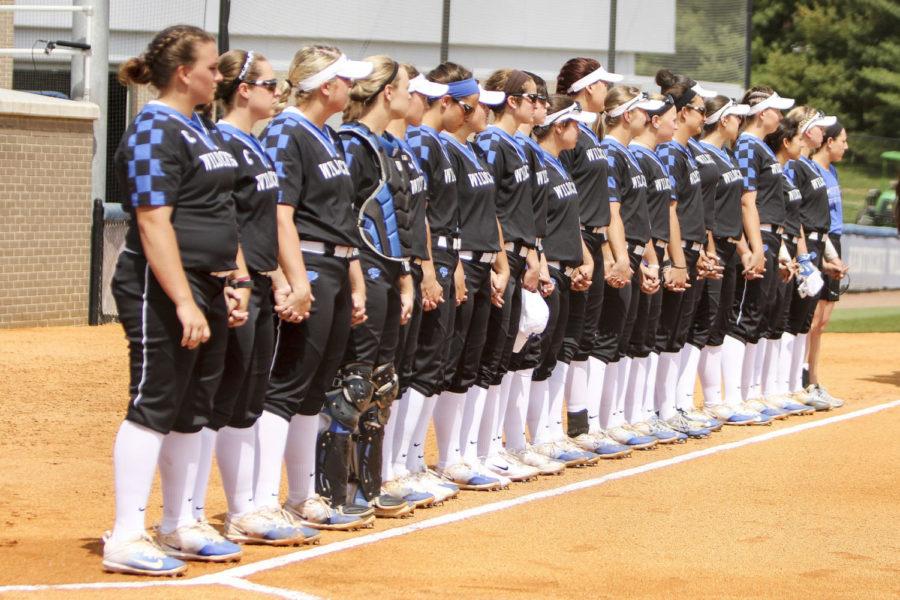 The Kentucky Wildcats softball team takes the line for the National Anthem prior to the game against the Florida Gators at John Cropp Stadium on Saturday, April 15, 2017 in Lexington, KY.

After a dominant three weeks of cross-country road play, the 9-3 UK softball team brings its four-game win streak to Kentucky. The Cats are set to play in their home opener on Thursday against the University of Dayton before participating in the 2018 John Cropp Classic this weekend.

The Dayton Flyers are 4-6 and are coming off a 2-3 weekend at the UC Santa Barbara Classic. They have three players hitting above .300 so far and are led in the circle by pitcher Manda Cash, who has a 2.07 ERA with a 1-2 record in 27.0 innings thrown. The Flyers’ four wins on their record come from defeating Radford, UNC-Wilmington, UC Santa Barbara and San Diego.

Along with pitching threat Cash, freshman Flyer Abby Ehrenborg is someone to watch as she currently leads the team in RBIs with nine and has a batting average sitting right at .300.

The Cats are making setting program records look easy, and in light of the Cats’ home opener, here are some stats and key things to look for as UK takes the field this Thursday.

Kentucky ranks 14th nationally in runs scored, which is fifth in the SEC. The Cats also have stolen 31 bases through the first three weekends of the season, which is a program record for most bases stolen through the first 12 games of the season. The Cats also tallied eight stolen bases against Bradley this past weekend, tying the program record for most in a game (Samford, March 1999).

Bailey Vick is a key Kentucky player to watch for as she’s shining bright for the Cats at the plate so far this season. Vick’s batting average is a whopping .633. On Saturday versus Bradley and Harvard at the Citrus Classic, the sophomore reached base in all nine of her plate appearances while also scoring four runs.

In addition their home opener on Thursday, the Cats will play three more home games over the weekend in the John Cropp Classic. Kentucky will play in a double-header Saturday against Ohio University and Southeast Missouri State University to follow, starting at 1:30 p.m. On Sunday the Cats will face SEMU again at 12:30 p.m.

All of the games will be broadcast live on the SEC Network+, ESPN3 and the ESPN app.