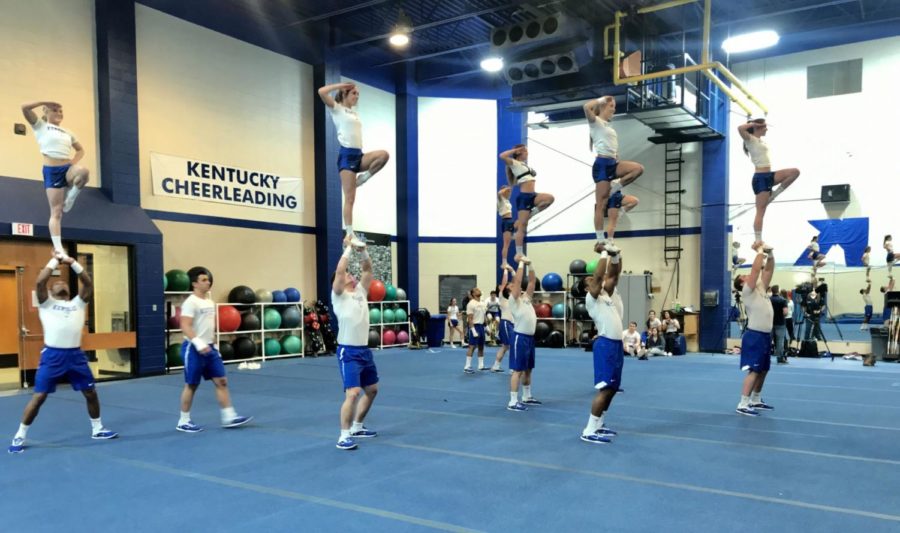 Normally at this time of the year, the Kentucky cheer team is finished with national competitions, but this season is a little bit different.

UK still has its biggest cheer competition of the season left to go, which will take place in Pyeongchang, South Korea, at the Winter Olympics.

Kentucky was selected to represent Team USA at the Winter Olympics in late November, which was a month and a half out from the team’s other big competition: the Universal Cheerleaders Association National Championships.

When the news first came out, Kentucky cheerleaders celebrated that they were going to the Winter Olympics, but they did not want that to get in the way of the main goal, which was winning their 23rd national championship.

They were able to accomplish that goal, which makes their upcoming trip to Pyeongchang much sweeter.

After the national championship victory, the team took a week off to get mentally and physically ready to train and compete at the Winter Olympics. Because of school schedules, the squad only got to practice once a day, four times a week.

“We’re not taking the bar up because we pushed the level of difficulty as far as we could this year and to try to go above and beyond, I don’t think that would put us in the best light for what we want to do,” Thompson said. “It’s our first time so we really want to make sure that we do a great job over there.”

The Cats will get a chance to show their routine at the end of the Winter Olympics in a “friendly” one-day competition against seven other countries. A victory wouldn’t count as an official world championship, but Thompson doesn’t view it that way.

“They call it a friendly competition, but only thing I heard was competition, so we want to make that we go over there and do the best in representing ourselves in the right manner,” Thompson said.

Kentucky’s squad, which departs for Pyeongchang on Feb. 17 and will return on Feb. 28, consists of 16 cheerleaders. They will be going up against countries such as Russia, Norway and South Korea, who will be carrying more than 16 cheerleaders.

Since it’s a friendly competition, there are no rules regarding how big a country’s squad can be. However, Thompson is still confident that they can win.

“I feel that our 16 and what we put forward on the floor can be competitive compared to say the 30 or the 24 because of the level of difficulty, the skills, our fast pace and just the ability at which they’re able to execute,” Thompson said.

Another aspect that will help this team compete for gold in Pyeongchang is the bond they share. Some of these cheerleaders have been teammates since they were freshmen, and to end their careers at the Winter Olympics will be a memory they can carry forever.

“Another thing too is just how close we are as a team is definitely like second to none,” said Kelsey LaCroix, a four-year cheerleader from Illinois. “We are all best friends, we all come in here, sometimes we see a little too much of each other, but definitely we’re all just really good friends.”