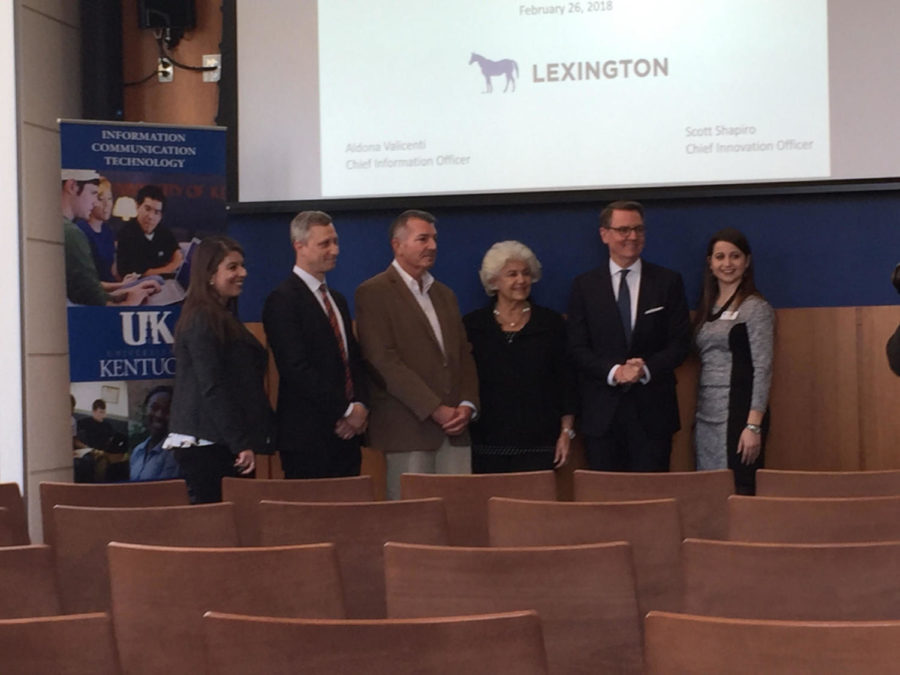 Lexington Mayor Jim Gray and LexGig officials pose for a picture after their presentation in Woodward Hall on Monday, Feb. 26, 2018. Photo by Noah Oldham

The LexGig project will work with the company, MetroNet, to build a system of fiber-optic cables across the city to create a network capable of providing gigabit internet speeds.

Gray gave opening remarks at the event, which was hosted by the School of Information Science.

The main speakers, Chief Information Officers Aldona Valicenti and Scott Shapiro, have been working on the project for the past three years and anticipate three more to fully construct the fiber-optic network.

The plan would bring the network to most of urban Lexington. According to Shapiro, with the help of MetroNet, Lexington will become the largest gigabit city in the U.S.

Valicenti said that telephone poles are the best method for implementing this new infrastructure because it is easily monitored, mitigates costs and is easily accessible.

Shapiro said the mayor wanted to focus on creating a long-lasting system and covering the whole city in a way that won’t make the network exclusive.

Gray compared the building of a fiber-optic network in the digital era to the building of railroads and highways in the past. Gray described the project as “nothing short of a miracle.”

“I want to take this moment to publicly thank Aldona and Scott for this really remarkable work, that is going to put Lexington more than just on the map, but is going to give us a competitive and strategic advantage as a university city, that we just haven’t had before,” Gray said.

Shapiro said the biggest challenge that LexGig faces is any damages that could occur during the construction of the network. However, according to Valicenti, MetroNet is quick to self-report when they have made mistakes and will pay for repairs.

According to Shapiro the first customers will have access to the gigabit internet speeds this summer.