UK baseball falls to Xavier in front of record crowd 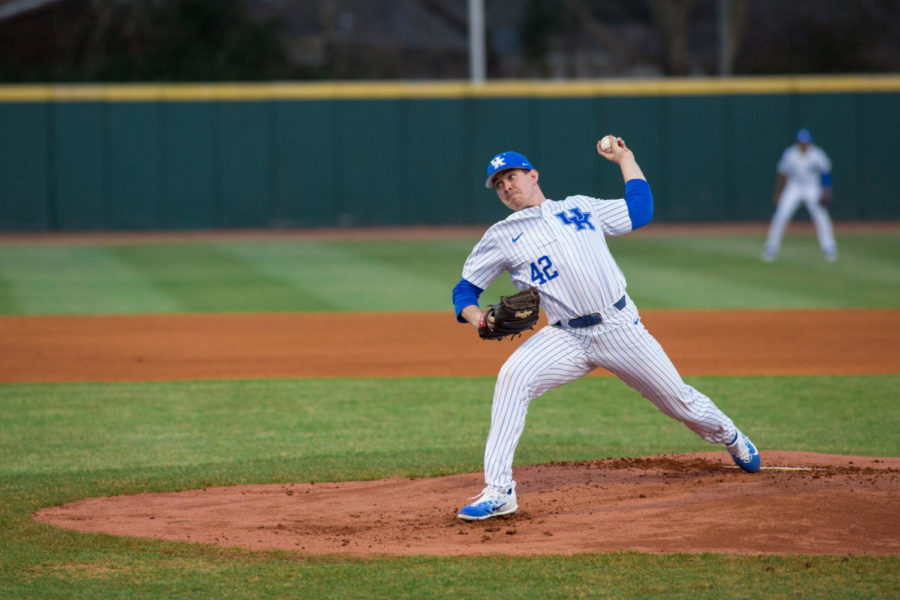 University of Kentucky Pitcher Brad Schaenzer throws from the mound during the 2018 baseball season home opener against Xavier University on Tuesday, February 20, 2018 in Lexington, Ky. Photo by Jordan Prather | Staff

Big Blue Nation showed its support at Cliff Hagan Stadium on Tuesday and broke the record for regular-season attendance with 4,118. However, the Cats weren’t able to pull off the win for the home crowd, falling to Xavier in extra innings 3-2.

After Tuesday’s loss to the Musketeers, the No. 8 Cats are now 4-1.

“When I think of a college atmosphere and a home-field advantage, boy did the Big Blue Nation provide that tonight, for us,” Mingione said.

Senior right-handed pitcher Brad Schaenzer started on the bump for UK. He lasted five innings, allowing five hits and striking out four. Schaenzer was relieved by right-hander Carson Coleman in the top of the sixth inning, and lefty Mason Hazelwood shortly after.

Freshman right-hander Jimmy Ramsey had another phenomenal performance on the mound following his debut in South Carolina over the weekend. Ramsey recorded five strikeouts in his 3.1 innings pitched while allowing only one earned run and no walks.

The Musketeers started things off early in the first inning after Allbry Major singled to the gap in right field, scoring two runs. The Cats did not answer until the bottom of the third, when Trey Dawson scored on a sacrifice fly from Ben Aklinski, making it 2-1 Xavier.

Major replaced Xavier’s starting pitcher in the bottom of the fifth and showed his prowess from both sides, striking out three batters in 1.2 innings pitched.

After Major left the mound in the fifth inning, the Cats tied the game at 2-2 when T.J. Collett hit a home run to right field in the sixth inning.

The score would remain 2-2 after nine innings, sending the game into extra innings for the second time in five games for the Cats. The Musketeers tripled in the top of the 10th and scored on a sacrifice fly from Natale Monastra.

The Cats failed to produce the tying run in the bottom of the inning and fell short to the Musketeers.

The Cats will face the Oakland Grizzlies this weekend in a three game series, their first of the season.