UK Baseball is gearing up for another great season 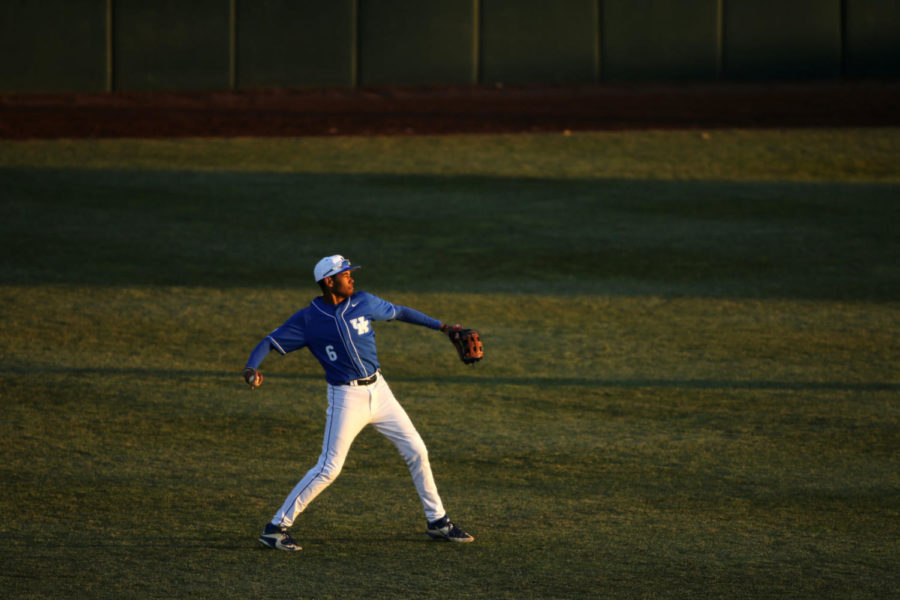 Kentucky outfielder Tristan Pompey throws the ball in during the game against Austin Peay on Mar. 2, 2016, in Lexington, Kentucky. Photo by Michael Reaves | Staff

The 2018 baseball season will shortly begin for the No. 8 UK team. The Cats have a great deal to look forward to accomplishing this season under second-year head coach Nick Mingione.

The Cats will hope to make the NCAA tournament for the second consecutive season and make their first trip to Omaha, Nebraska, for the coveted College World Series title. Before any of this will be possible, however, the Cats must have a winning regular season against some of the top teams in the nation.

UK opens its season against Wofford College in Spartanburg, South Carolina, in a four-day tournament in hopes of having a better start to the season than they did last year, where they gave up the first four games before coming up with a win.

The biggest challenge in UK’s non-conference play will come in the Shriners Hospitals for Children Classic in March, in which the Cats will face three teams who are ranked in various preseason polls.

The Cats will play a number of other non-conference games, including matchups against Xavier, Murray State and a series against Texas Tech. Wins against these opponents will be essential in order to pad their record for the big SEC matchups, which kickoff on March 16 with a big series against No. 4 Arkansas.

Road games are never easy and this season will be no exception. The Cats will be on the road to face SEC rivals Arkansas, Alabama and Vanderbilt in what will be tough games but hope to return to Lexington with the most possible wins on the road.

Home game advantage is always a big deal in college baseball, but is especially important for the Cats. They’re known for thriving offensively at Cliff Hagan Stadium in front of Big Blue Nation.

In arguably the biggest conference matchup of the season, the Cats will face the No. 1 Florida Gators, 2017 College World Series champions. The matchup will not take place until April. The Cats will also host Auburn, South Carolina and Mississippi State, all expected to be impressive series.

With one of the highest ranked recruiting classes in program history and All-American’s Sean Hjelle and Tristan Pompey returning, the Cats have the potential for an impressive postseason run. Mingione will look to have another striking season and take the team further than they have ever been.

“All our players are talking about is Omaha and I think all Cats fans would love to go. That’s going to be our expectation and always will be. We want to be national champions. They [fans] can expect a team that’s going to compete hard and wear their Kentucky blue with pride,” Mingione said.