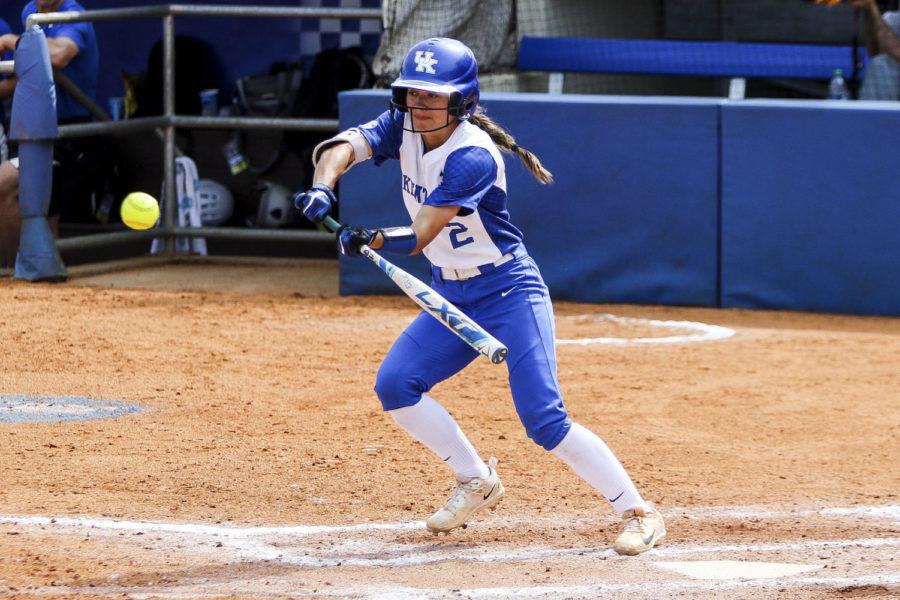 Kentucky Wildcats outfielder Bailey Vick lays down a bunt single during the second inning of game two of the Lexington Regional at John Cropp Stadium on Friday, May 19, 2017 in Lexington, KY. Photo by Addison Coffey | Staff.

The UK softball team started off its jam-packed weekend out west at the Campbell/Cartier Classic with a 5-0 shutout over San Diego State University on Thursday evening.

Things were rather quiet through the first three innings of Thursday’s game in San Diego, but a SDSU third base error to drive in a run, a two-RBI single by Lauren Johnson and a Bailey Vick RBI single made some noise for the Cats in the top of the fourth inning to make it 4-0.

The 4-0 score remained until the sixth inning, when Erin Rethlake took the plate and drove in an RBI single to take a 5-0 lead, which ended up as the final score.

Vick had an impressive game at the plate as she went 4-4 on four singles, plus an RBI. Her four singles extended her streak of multi-hot games to three out of the last four.

The Cats were also supposed to face UIC on Friday, but that game was cancelled due to UIC not being able to make the trip because of weather.

The Cats conclude this weekend’s play with another double header Saturday night, as they take on North Dakota State University at 6:30 p.m. before playing Cal State Fullerton again at 9 p.m.

Be sure to check out Kentucky Softball’s twitter page, @UKSoftball, for live updates during every game.