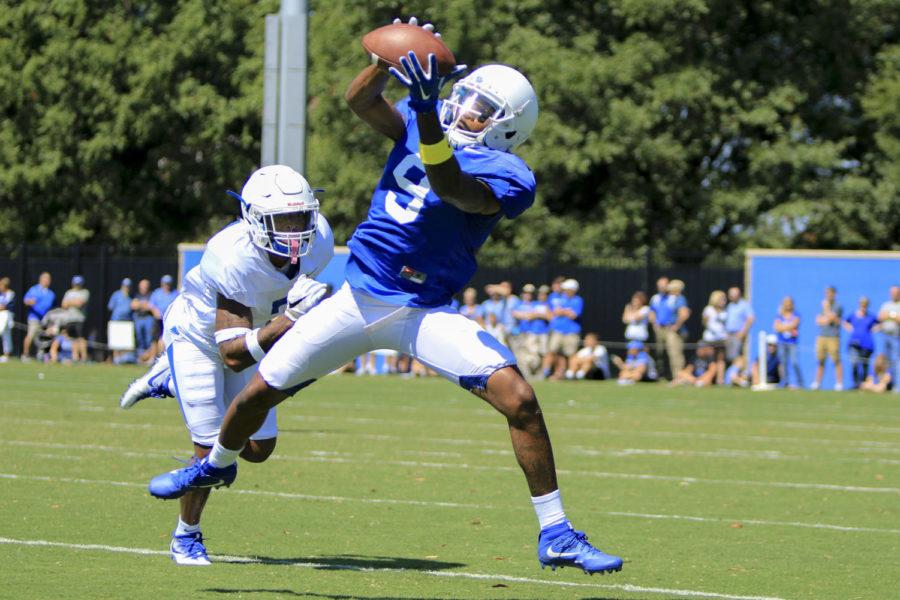 Seniors from last year’s UK football team worked out for and spoke with scouts, trying to make it onto the radar of an NFL franchise.

Wide Receiver Garrett “Juice” Johnson produced impressive numbers on the day, with a 4.39 40-yard dash time, and a 41-inch vertical. Johnson also performed well in the positional drills, and he expects to have improved his stock tremendously.

Johnson’s 41-inch vertical would have been the highest out of all wideouts that competed in the NFL Scouting Combine. Scouts have kept a close eye on him, and he is expected to be drafted in one of the later rounds.

Linebacker Courtney Love put up some quality numbers on the day, logging a 4.74 40-yard dash time, along with a 35-inch vertical. Love also competed in the bench press drill, managing to lift 24 reps at 225 pounds.

Offensive lineman Cole Mosier had an impressive outing Friday, managing to lift 28 reps at 225 pounds. The 335-pound lineman also had a 24.5-inch vertical after tearing his ACL before his final season with the Cats.

Defensive back Kendall Randolph also competed on Friday, posting a 4.5 40-yard dash, along with a 9-foot 9-inch broad jump and a 35.5-inch vertical.

“I’m going to keep speaking that 4.3 into existence,” Johnson said when asked about his 40-yard dash time. “So, I guess today, God blessed me with that 4.3, so I was happy about that.”

It was a successful day for UK’s seniors and past players, who performed in front of 17 scouts from different teams. The NFL Draft is set for April 26-28 in AT&T Stadium in Arlington, Texas. This is the first draft to take place in an NFL stadium and the first to be held in Texas.