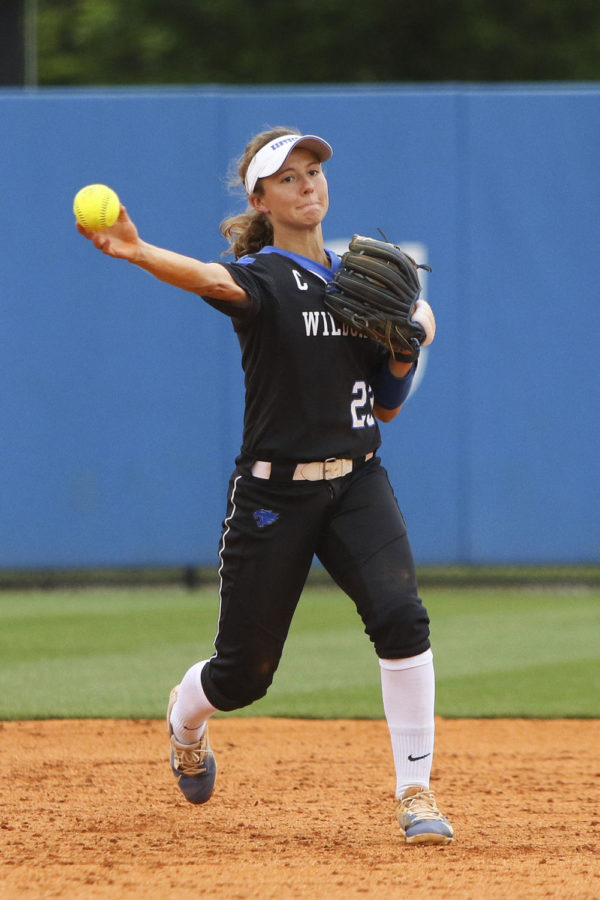 Kentucky Wildcats short stop Katie Reed throws the ball to first base during the sixth inning of the championship game of the Lexington Regional at John Cropp Stadium on Sunday, May 21, 2017 in Lexington, KY. Photo by Addison Coffey | Staff.

The UK softball team went head-to-head with SEC-rival Alabama in the start of their three-game series this weekend at home and split Saturday’s doubleheader 1-1.

The Cats struggled at the plate in game one of the series against Alabama pitcher Alexis Osorio, who gave up only one hit in a complete game. Autumn Humes started out the game on the mound for the Cats, pitching three innings until Larissa Spellman took over. The two allowed nine hits in the 9-0 loss to the Crimson Tide.

Kentucky’s only hit came from Abbey Cheek when she singled up the middle in the second inning.

The Cats improved their hitting in game two which helped them tie the series with an 11-6 win. The game started out with a pair of runs in the first inning— one from each team. Kentucky’s run came from a Cheek RBI single.

According to Kentucky head coach Rachel Lawson, a key play of the game for the Cats was a double play made by Katie Reed in the first inning.

The second inning was big for the Cats as they scored three runs, going up 4-1 on the Crimson Tide. All three runs were scored on a Jenny Schaper double with bases loaded, bringing in Bailey Vick, Katie Reed and Lauren Johnson.

Alabama took the lead in the top of the third, scoring five runs to go up 6-4 on the Cats. However, the Tide didn’t hold that lead for long as UK responded with three runs in the bottom of the third on two singles and a wild pitch.

A two-run homer from Reed in the sixth inning gave the Cats a few insurance runs to go up 11-6 heading into the seventh inning. Alabama didn’t score in the top of the seventh.

“I wanted to be more aggressive than I was in game one, and every time I got into a 2-0 hitters count in that game I was just expecting a strike and wanted to be aggressive,” Reed said. “I actually thought she was going to have that (home run) so I was happy when I saw it bounce over.”

Lawson says it’s “awesome” that her team was able to bounce back from a 9-0 loss and take home the win in game  two.

“It shows that they’re tough and they know how to battle, and the other thing is that’s what you need for the postseason because you’re playing back to back to back,” Lawson said.

The Cats will wrap up the weekend series on Sunday at 1 p.m. to decide the winner of the series. UK is looking for its second series victory against SEC competition this year.