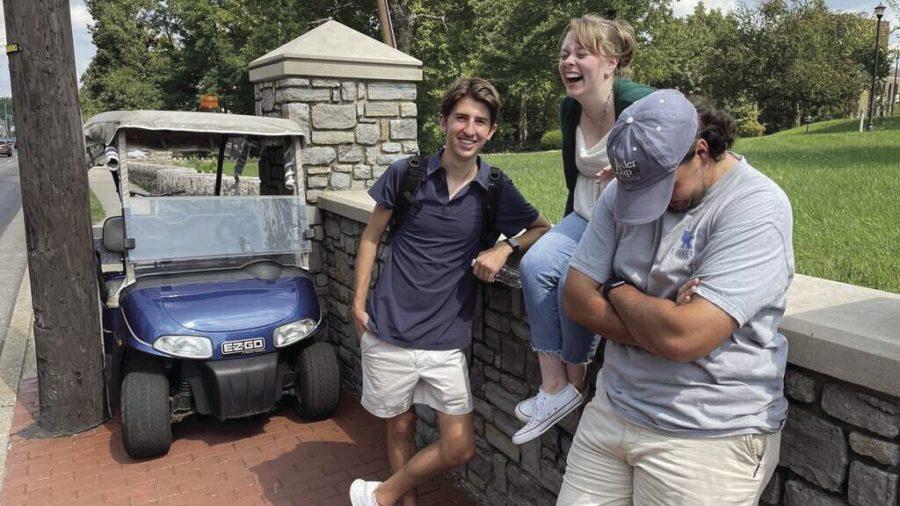 Jack Weaver, Rayleigh Deaton and Michael Clubb, left to right, wait for maintenance to tow the Kernel's golf cart out from between a utility pole and a brick wall after Clubb got the golf cart stuck on Monday, Sept. 13, 2022, in front of Scovell Hall in Lexington, Kentucky.

It all happened so quickly. Wait, no, not really. We definitely saw it coming and it was definitely preventable.

For context, back in September, the Kernel’s art director, Michael Clubb, and I were sitting in the newsroom doing homework and being generally very productive I’m sure. We got a message from Jack Weaver, the managing editor, that his roommate had seen several EMS vehicles lined up on S Limestone, and Michael and I decided to go check it out in case there was breaking news that needed coverage.

Side note, one of the perks of being editor-in-chief of the Kernel is you get to use the Kernel’s golf cart whenever you want, or at least whenever you know where it is. (There’s nothing like waving at the proletariat peasants who have to WALK everywhere from the comfort of a golf cart that definitely always works.)

So anyway, Michael and I were going to take the golf cart from the Kernel newsroom in McVey Hall – if you don’t know where that is, honestly good for you – and drive it up S Limestone toward the hospital, where the reported action was going down.

We got on the sidewalk and were on our merry way when we approached The Spot.

I still shudder even now, dear reader, as I write this. The events you are about to read will stay with you for the rest of your days, as they do in mine. I must warn you, if you are averse to harrowing tales of almost certain, unavoidable disaster, stop reading now before it is too late.

The Spot. Across the street from the Hub, there is a stone wall that runs along the sidewalk, and there is a wooden electric pole on the opposite side of the sidewalk near the intersection of S Limestone and Huguelet Avenue, creating a space in the middle. A space that just so happens to be approximately one golf cart in width.

You see where this is going. And I did too.

From the passenger side, I saw this tiny space get closer and closer as we sped toward it at a blazing 10 miles per hour. Now, I had just known Michael for a few months, as I was the new kid at the Kernel. He’s also a senior, and surely that comes with a degree of wisdom and knowledge, right? So who was I to question his authority?

Turns out a few more credit hours don’t mean squat when it comes to driving a golf cart.

Never has the phrase “between a rock and a hard place” held such personal meaning for me, as I sat there in a golf cart, wedged between a stone wall and an electric pole next to S Limestone. Unflapped, Michael first had the idea of flooring the gas pedal (which got us even more stuck) and then putting the golf cart in reverse and trying to free us by backing up (didn’t work).

I was dying of laughter by this point, but I still had a job to do. Definitely just because I needed to cover any breaking news and absolutely not because I was at all second-hand embarrassed and wanted to be as far from that situation as possible, I hopped out of the golf cart, told Michael I’d go ahead and see if anything was happening and sprinted the several blocks to the hospital.

Long story short, there was not an EMS vehicle in sight – I don’t know what Jack’s roommate saw but it was long gone by the time I got there. We had to get a gator golf cart with a winch to free the Kernel-mobile, the dean of the College of CI drove by, and lots of laughs were shared by all. Oh, all except Michael, of course. That must have been super embarrassing, can’t even imagine.

Anyway, that’s how we found out that the space between the stone wall and the electric pole on S Limestone is exactly one golf cart in size. They should put a plaque up or something, it’s definitely worth commemorating.