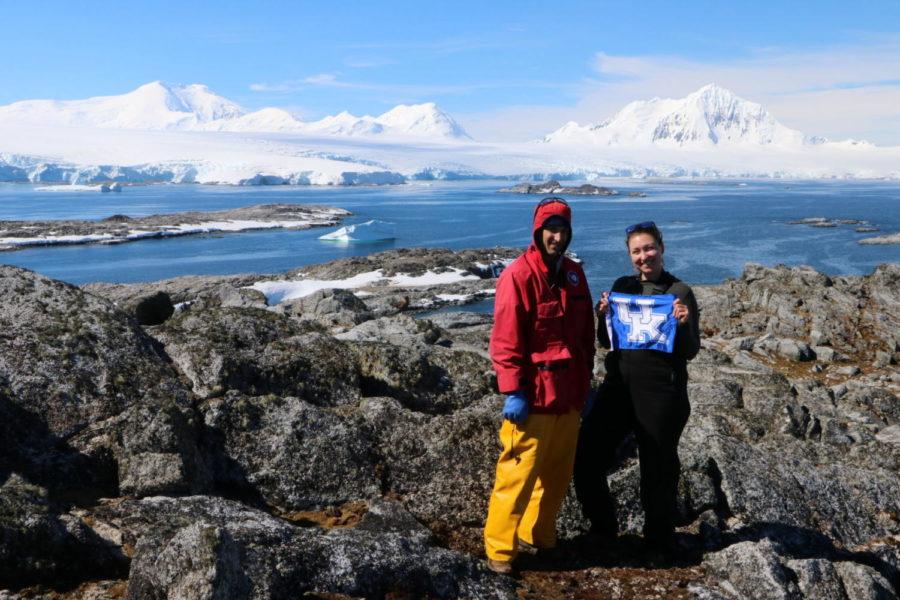 Dr. Nicholas Teets and Leslie Potts spent the winter in Antarctica studying the Antarctic midge, an insect that may be the answer to cryopresevation.

Two staff members from UK’s Department of Entomology recently returned from a chilling winter spent on the continent of Antarctica, studying an insect that may be the answer to cryopreservation.

Assistant professor Dr. Nicholas Teets and graduate student Leslie Potts spent roughly five weeks on Palmer Station studying the Antarctic midge, which is the largest land animal to spend its whole life on the continent, for its uses in understanding cryopreservation and bringing back information for the community.

Cyropreservation is the freezing of biological matter to help preserve it for long periods of time. According to Encyclopedia Brittanica, “cells can live more than a decade if properly frozen,” and cryopreservation is used in many medical practices and in the preservation of human embryos, eggs and sperm.

“It’s just like us. It’s an organism with complex organ systems and tissues,” said Teets, who began studying the Antarctic midge back when he was a graduate student.

The Antarctic midge is of genus belgica and species Antarctica. It is the world’s southernmost living insect, and only one of three living on the frigid continent. While the rest of the world hosts between five and six million species, Antarctica is the exception to insects being the dominant terrestrial animal.

“This little tiny midge that we work with can spend nine months of the year frozen solid,” Teets said, noting the possible uses the midge can have in biomedical research.

Teets spent his time on the station studying the physiology of the midge and understanding just how the insect dealt with the low temperatures. Potts focused more on the ecology of the studies, spending nine weeks observing how the environment may affect its behavior and nutrient status. Both Teets and Potts were able to observe a number of different species apart from the midge due to its remote yet lively location.

“For such a barren continent, it’s such a biodiversity hotspot,” Teets said. He and Potts were able to see a variety of species, including seals and whales, in addition to the midge.

For Potts, the most striking part of her voyage was “all the really cool animals that we never really get to see. Like whales and penguins and of course the midge.”

In addition to studying the Antarctic midge, Potts came back from the continent with information to be used in helping the community learn more about the fascinating insect. Her role on the team was the outreach coordinator, working to put their research in places like the Living Arts and Science Center, the Explorium of Lexington and various elementary and high schools around the Lexington area.

“The Living Arts and Science Center do a program called ‘Science Explorers’ where they go to at-risk schools around Lexington and do a science program once a week,” Potts said. “We’re going to introduce this science to them.”

The midge project was funded by the National Science Foundation, and Potts worked to introduce the variety of life in Antarctica into the Lexington community to further NSF’s mission of advancing the progress of science.

“We’re going to introduce this science to them,” Potts said. ”They get to see Antarctica and the science we did down there.”

This was the last year of the Antarctica project, but, they are applying for additional funding in the spring to get back to the continent in 2020, Teets said. This will include four years of projects with at least three field seasons. The continuation would mean furthering the understanding of not only the midge, but all variety of species in Antarctica, for future generations of scientific minds.

“We hope to get back in 2020 and have a few more field seasons where we can send people from UK back down there,” Teets said.