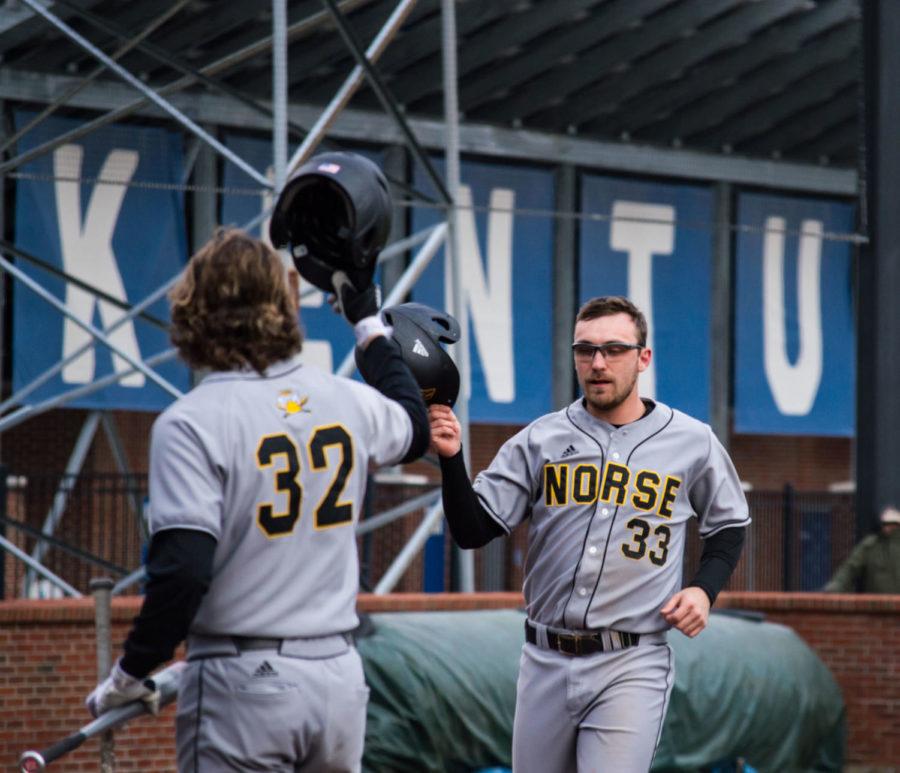 NKU #33 celebrates with a teammate after a home run on Wednesday, March 7, 2018 in Lexington, Ky. Kentucky was defeated 8 - 6. Photo by Edward Justice | Staff

The No. 6 UK baseball team lost its second midweek game of the season on Wednesday to the NKU Norse by a final score of 8-6.

The Cats’ offense could not produce early today behind a struggling starting pitcher and bullpen. UK made a comeback at the end but fell short.

“As long as I’m the coach here and our coaching staff is here, we’ll never quit,” head coach Nick Mingione said after the loss.

This was only the second victory over UK in history for the Norse. The last was on March 29, 2016.

The afternoon matchup was the worst overall performance UK has had on the mound thus far. The Cats used six pitchers and seemed to flounder until right-handed pitcher Chris Machamer took the bump and recorded three strikeouts, finishing the game for his team.

Veteran left-hander Brad Schaenzer got the start against the Norse after beating them last year, 10-1. Schaenzer fell behind early in the game and threw too many pitches up in the zone. The Norse wasted no time.

In the top of the second inning, Chad Roberts hit a home run to right field, putting NKU on the board first.

The Cats answered and took the lead in the bottom of the inning, scoring two runs after a sacrifice-fly and an error.

Schaenzer loaded the bases in the fourth and Jake Richmond hit his third home run of the year, a grand slam to left center field. Three back-to-back doubles in the fifth brought it to 7-2 and the Norse scored their last run on a sacrifice-fly later in the inning.

NKU’s starter Sam Williams had his longest outing of the season. He pitched five innings and gave up two runs while striking out five.

The Cats did not come up with another run until the eighth inning, when Tristan Pompey hit a three-run home run to right field which continued the Cats’ streak of hitting a home run in every game.

Troy Squires hit another home run in the ninth, bringing the Cats within two runs of NKU, but they could not string together any more hits.

“We’ve gotta learn from this game,” Mingione said. “We’ve got a top five team coming in in Texas Tech, who has just done phenomenal this year, so we’re definitely going to have our hands full but it’s going to start with us.”

With the loss, the Cats ended their eight-game winning streak and lose some momentum going into this weekend. They will face the No. 3 Texas Tech Red Raiders, who are 14-0.