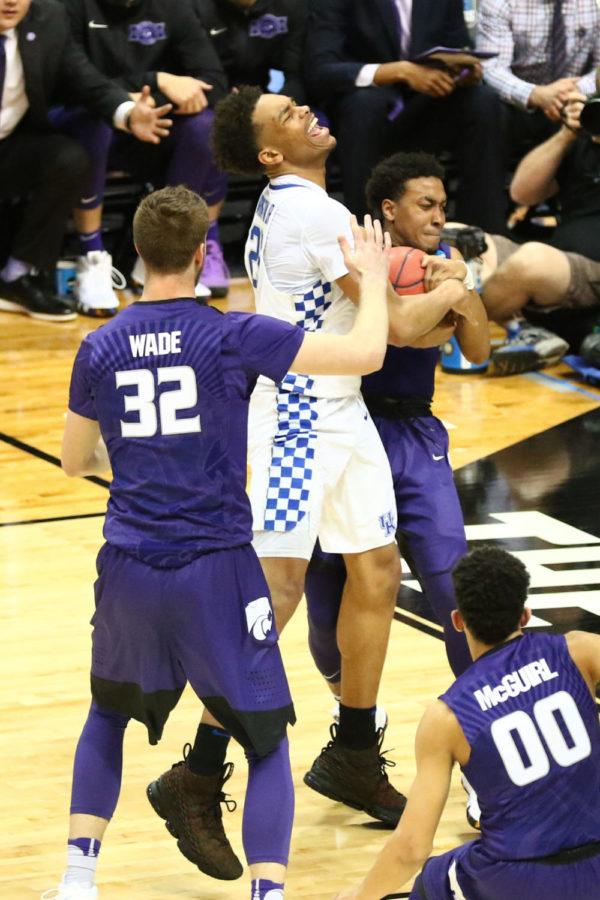 Kentucky freshman forward PJ Washington guards the ball during the game against Kansas State in the NCAA Sweet 16 on Thursday, March 22, 2018, in Atlanta, Georgia. Kentucky . Photo by Arden Barnes | Staff

Five-seed UK’s season ended when it lost to nine-seed Kansas State 61-58 in the Sweet 16 Thursday night in Atlanta.

After trailing by no more than two points in its first two games, Kentucky trailed Kansas State 33-29 at halftime. UK shot 26 percent from the field.

Hamidou Diallo picked up his second foul with 17:10 left in the first half, and Kansas State started the game with a 13-1 run by going 3-4 from three. UK had four turnovers in the first six minutes.

Led by a three-point shot from Quade Green, Kentucky went on a 9-0 run.

Diallo left the game in the first half with an ankle injury, but he returned to the game minutes later.

However, the fouls began to pile up for UK. Wenyen Gabriel, Kevin Knox, Green and Diallo picked up two fouls early in the game. Diallo got his third foul in the first half.

Off a missed free throw, Gabriel grabbed a rebound, made a basket and got fouled late in the half. Kentucky scored 16 of its 29 points on free throws at halftime.

Gilgeous-Alexander’s free throws and baskets at the rim kept them in the game. He had 13 points and four rebounds at the break.

P.J. Washington had seven points and seven rebounds at the half, but would end up with many more.

UK started the second half by attacking the rim. Washington made a layup and Knox knocked down two free throws to tie it up.

A Green three-pointer gave UK its first lead with 17:01 left in the game.

KSU regained the lead with a three-pointer of its own. Three-point shooting kept KSU in the game, taking them on a 9-0 run. UK head coach John Calipari picked up a technical foul for being out of the coaching box.

Kentucky trailed by five with 11:30 left in the game.

Washington grabbed rebounds and scored down low and finished with a double-double of 18 points and 15 rebounds.

Knox hit his first three-pointer of the tournament to keep the Cats in the game, and he ended the game with 13 points and 8 rebounds.

Gilgeous-Alexander gave UK the lead once again with less than four minutes to go, but he turned the ball over on the next possession, leading to a Kansas State basket. UK was plagued by turnovers all night, committing 15.

UK trailed by one point with less than three minutes to go. Washington scored a basket and got fouled as the teams exchanged leads.

With the game tied up late, Washington had a huge blocked shot.

KSU star Barry Brown Jr. hit a late layup to put the Wildcats up three and Gilgeous-Alexander missed a three to tie with time expiring.

UK will begin regular season play for the 2018-2019 season against Duke on Nov. 6 at the State Farm Champions Classic in Indianapolis.