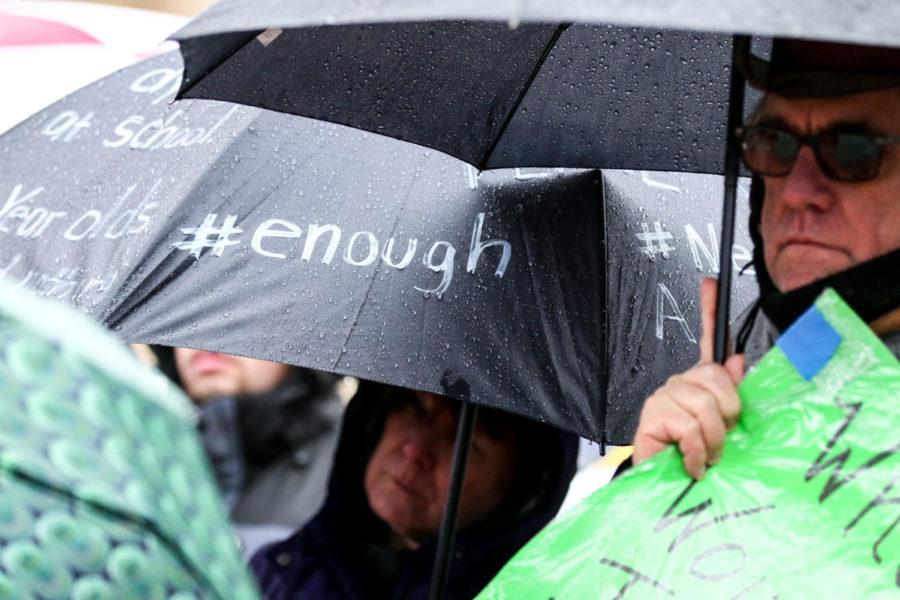 A protestor holds an umbrella with handwritten statements calling for change during the March for Our Lives Lexington on Saturday, March 24, 2018, in Lexington, Kentucky. The march was held in solidarity with gun violence protests across the country. Photo by Arden Barnes | Staff

Thousands of Lexington students and other supporters braved the cold, pouring rain on Saturday to participate in Lexington’s March For Our Lives protest.

The protest, held along with other protests nationwide, was organized in an effort to put an end to the mass school shootings epidemic that has been rocking the nation for the past decade.

The initial incident that prompted this plan of action was the Marjory Stoneman Douglas High School shooting that killed 17 students in February. Since then, a school shooting at a Maryland high school killed one, and 19 other mass shootings killed 75, according to the National Gun Violence Archive.

Local youth are determined to end needless deaths. March For Our Lives was created, inspired and led by students across the country. Students from local schools like Paul Laurence Dunbar, Lafayette, Tates Creek and many more joined forces to spread awareness at Saturday’s march. Their voices were heard as they took turns on the microphone reading poems, singing songs and leading chants before a large crowd.

“We wanted to get our message across that it is gun control, period,” said Dunbar senior Karelyn Payton. “Gun violence is a problem not just in schools, but in our community… and even though you may not know someone that is a victim to gun violence, it is still an extreme problem. We shouldn’t have to be doing this. People’s lives matter… They could have been the next president or congressman, and their lives were taken away from them because people didn’t want to give up their guns.”

Waveney Brooks, a Tates Creek high school senior, shared a poem crying out for change before the large freezing crowd.

“I knew if I wasn’t willing to sacrifice my time, warmth and comfort to push legislatures nothing would really change and I couldn’t really call myself an activist,” Brooks said.

Mothers were also there to give their support. Allison Cox, who is a member of the Moms Demand Action organization, said she has three children and she is tired of worrying about them when she drops them off for school.

Other supporters of the movement included UK students. Connor Stokley, an elementary education junior, said she wanted to show her support because she wants to be a teacher.

“I don’t think anyone deserves to be shot or scared while sitting in a classroom,” Stokley said.

“I am going to be a pediatric nurse,” said UK senior Jackie Mongeau. “And I don’t really want to ever have to take care of a kid that was shot in a school shooting. I don’t think it should be an issue anymore and I think we should make a change so it stops happening.”