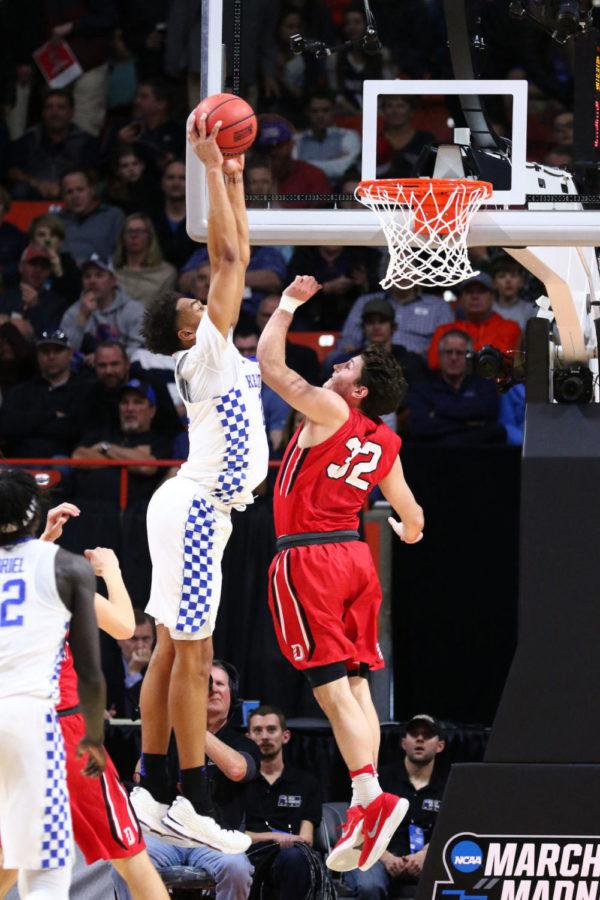 Kentucky freshman forward PJ Washington dunks the ball during the game against Davidson College in the first round of the NCAA tournament on Thursday, March 15, 2018, in Boise, Idaho. Photo by Arden Barnes | Staff

The 5-seed Kentucky basketball team advanced to the second round of the NCAA Tournament by beating No. 12 seed Davidson 78-73 in Boise, Idaho, on Thursday.

While the Cats outscored Davidson in the paint 10-26 in the first half, Davidson kept the game close with its three-point shooting.

Kentucky’s legendary three-point streak ended, as the Cats went the whole game without a make from deep for the first time since 1988.

Guard Hamidou Diallo had a steal and slam to start the game and a career high three blocks in the first half. Diallo finished the game with eight points and three rebounds.

Kevin Knox and P.J. Washington combined for 20 points in the first half to give UK a 10-point lead at the break. UK outscored Davidson 17-7 to end the half.

Washington had seven points in his first six minutes. Washington picked up his fourth foul with 11:12 left in the game.

Davidson cut it to three early in the second half. Davidson came out of the break shooting 5-5 from the field and 3-3 from the three-point line.

Davidson tied the game with nine minutes remaining. Davidson’s Jon Axel Gudmundsson hit his first five three-pointers of the half. Gudmundsson finished with 21 points, all coming in the second half.

Knox got hot near the end of the game, finishing with 25 points and six rebounds. He made several of the game-winning free throws to end the game.

UK will stay in Boise for its second-round matchup on Saturday. The Cats will face the winner of the talented 4-seed Arizona versus 13-seed Buffalo game.