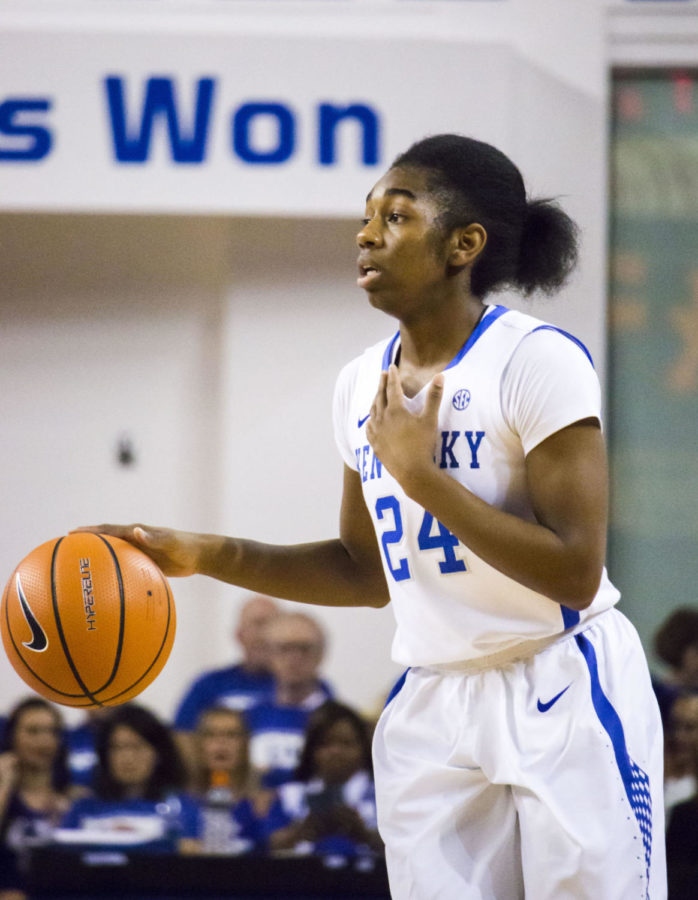 Junior guard Taylor Murray gets ready to pass the ball during the game against California on Thursday, December 21, 2017 in Lexington, Kentucky. Kentucky was defeated 62-52. Photo by Olivia Beach | Staff

On Friday afternoon, the Kentucky women’s basketball team fell to the No. 1 seed Mississippi State 81-58 in the quarterfinals of the SEC Tournament.

Kentucky’s best player was Taylor Murray, who led the team in points (15), rebounds (7) and assists (3). The Cats were no match for Mississippi State head coach Vic Schaefer’s daughter, Blair, who finished the game with 15 points, shooting 5-7 from behind the arc.

In the first quarter, the Cats got off to a rough start after Alyssa Rice picked up her second foul in less than three minutes of action. With KeKe McKinney out with a concussion, it was up to freshman Dorie Harrison to guard unanimous First Team All-SEC Teaira McCowan.

However, Kentucky held strong, and after being down by as many as eight points with under five minutes to go, Kentucky closed the quarter on a 15-6 run to go into the second period with a 23-22 lead.

Mississippi State pulled away in the second period. Rice picked up her third foul less than a minute into the quarter, beginning a 10-0 Bulldog run. Kentucky got its first bucket of the second quarter when Murray scored a jumper just under five minutes into the quarter.

Mississippi State then hit three three-pointers in 40 seconds to go up 16. They would take a 13-point lead into the break.

The third quarter began with a Maci Morris jumper, cutting the lead to 11. That was the closest it would be for the rest of the game.

Matthew Mitchell was assessed a technical foul midway through the period when the Cats were down 18. It only got worse after the technical, as the Bulldogs ended the quarter on a 12-6 run.

The Bulldogs didn’t give anything to Kentucky in the fourth quarter. Kentucky had three different two-minute stretches in the period when the Cats didn’t score. While Kentucky’s defense had its best quarter of the day, only allowing 13 points, the gap was too big to catch up.

Kentucky will be watching closely to see if Alabama gets an at-large big to the NCAA Tournament. If they get in, Kentucky will automatically qualify for the WNIT.

If Alabama doesn’t get in, the Crimson Tide will receive the automatic berth for the WNIT. Kentucky doesn’t qualify for an at-large bid to the WNIT– teams must have .500 or better record– and will likely play in the WBI.