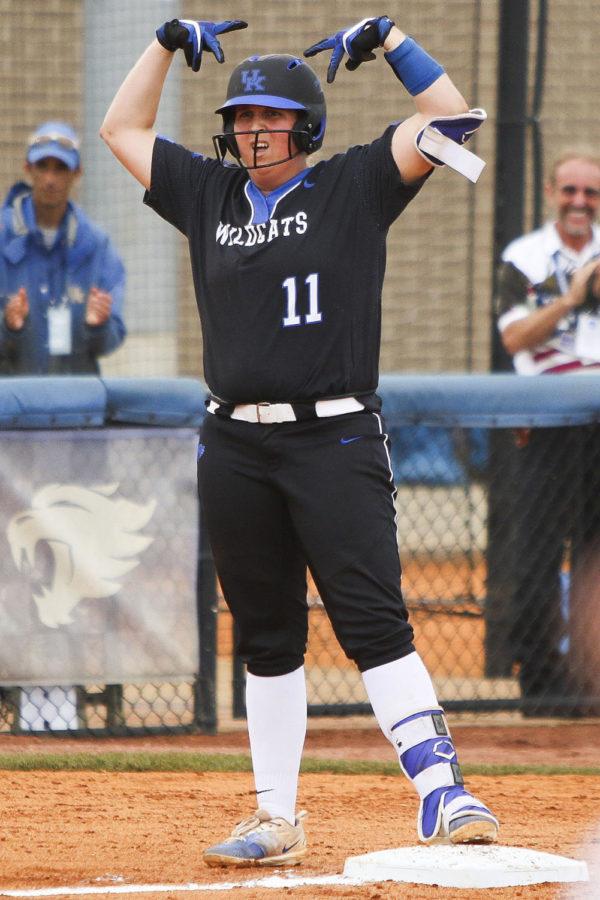 Kentucky Wildcats third baseman Abbey Cheek celebrates her triple in the third inning of the championship game of the Lexington Regional at John Cropp Stadium on Sunday, May 21, 2017 in Lexington, KY. Photo by Addison Coffey | Staff.

Freshman pitcher Bethany Todd made her first career start against SIUE, giving up only one hit through three innings.

“That’s her first career start and for her to come in and do what she did was great,” UK head coach Rachel Lawson said. “She gave up that first hit and for somebody who’s young, that could’ve rattled them. But what she did was settle down, she got her outs, the first run was kind of unfortunate, but other than that she did a really good job.”

The first run of the game came from 8-4 SIUE in the first inning on a Kentucky error. The Cats remained scoreless until the bottom of the fourth inning, when Abbey Cheek stepped up to the plate.

The junior third baseman blasted a hit beyond the left field fence to tie the game at 1-1. The homer was her seventh of the season.

“She’s really starting to hit her stride and mature as a leader,” Lawson said.

The bottom of the fifth inning resulted in two runs for the Cats, the first from a Katie Reed single to bring in Erin Rethlake, pulling up the score up to 2-1. Abbey Cheek added another run for Kentucky, making the score 3-1 as she executed a sacrifice bunt with bases loaded.

A Rethlake single up the middle in the bottom of the sixth added one more to the scoreboard for the Cats to make the final score 4-1.

After a long stretch of traveling and non-conference games, the Cats will finally start SEC play this weekend as they head to Florida to take on the Gators.

“From this past weekend, the last two games on Sunday, we scored a lot of runs, so I think we’re really excited and ready to start SEC play,” Cheek said, adding that her team’s offense is “the best it’s ever been.”

Lawson said she feels confident in her team because of their steadiness heading into SEC play.

The Cats are back in action this weekend for a three-day series in Gainesville against the Gators starting at 6 p.m. on Friday.