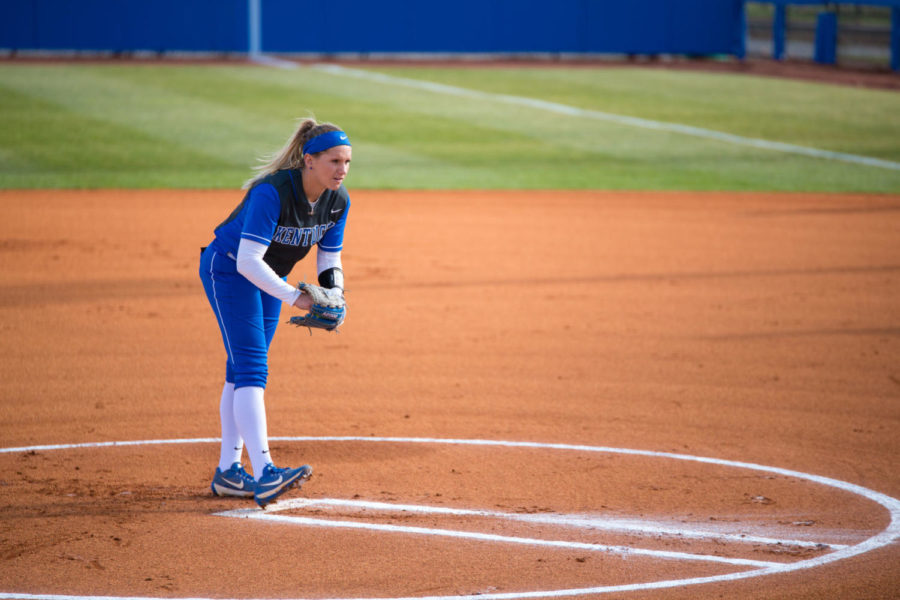 University of Kentucky sophomore Autumn Humes prepares to pitch during the home opener against the University of Dayton on Thursday, March 1, 2018 in Lexington, Ky. Photo by Jordan Prather | Staff

The UK softball team snapped its four-game win streak Friday and took a tough series loss against No. 11 Auburn this weekend.

Game one of the series was scoreless until the fourth inning, when Auburn’s Courtney Shea hit a lead-off home run to go up 1-0. The Cats allowed two more Auburn runs in the fifth inning.

Grace Baalman earned her first career RBI, singling up the middle in the seventh inning for her first hit and RBI. However, the Cats couldn’t get the win, losing 3-1.

Saturday brought the longest game of Rachel Lawson’s 11-year coaching stint with a total of 12 innings. Autumn Humes was sensational at the plate and earned the player of the game for the Cats as she threw all 12 innings, allowing nothing from Auburn for 11 of them.  Saturday’s game marked the longest in program history since 2005.

Despite Humes’ success in the circle, the winning run came from an Auburn walk-off home run in the bottom of the 12th inning to go home with the series win.

The final game of the Wildcats’ series against the Tigers started with an early single-run home run from Auburn in the bottom of the first inning. The following inning was quiet for both the Cats and Tigers, but UK responded in the top of the third with a Katie Reed two-run homer to go up 2-1. Auburn would then score three runs in the bottom of the third to go up 4-2.

A pair of runs were scored in the fourth inning, one from UK and one from Auburn. Brooklin Hinz grounded out to second base to score Kelsee Henson in the top of the fourth. The Tigers followed with an RBI single.

An Alex Martens sacrifice fly to left field scored Erin Rethlake and brought the Cats up to 5-4 in the fifth inning, before the Tigers would score the winning run in the bottom of the sixth inning of their 6-4 win.

Although the Cats couldn’t earn a win this weekend, they look to bounce back on Wednesday as they take on Ohio State University in Columbus at 6 p.m.