Diallo gives Calipari the performance he was looking for 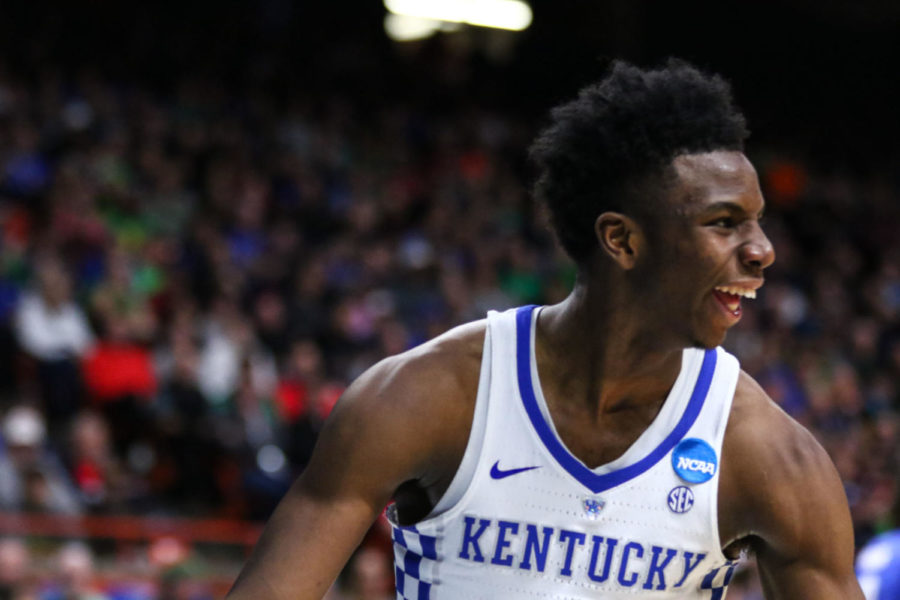 Kentucky freshman guard Hamidou Diallo celebrates after a dunk during the game against Buffalo in the second round of the NCAA tournament on Saturday, March 17, 2018, in Boise, Idaho. Kentucky defeated Buffalo 95-75. Photo by Arden Barnes | Staff

There was a point in the season when it felt like taking Hamidou Diallo out of the starting lineup would be a wise decision for UK, but John Calipari didn’t listen.

So what did Diallo do to reward his head coach? On Saturday against Buffalo, Diallo had his first 20-point game since mid-December with a 22-point, eight-rebound and two-block performance to help UK reach the Sweet 16.

“A bunch of coaches probably would’ve given up on me, it just shows that he believed in me, the people that was talking, he didn’t listen to,” Diallo said.

Diallo scored 18 of his points in the second half, by doing what Diallo does best: attacking the basket and getting points in the paint instead of settling for jump shots.

“That’s what we need from Hamidou every game, just him attacking the basket, getting to the rack, getting into the lane, knocking down those 15-footers, that’s what he does best,” teammate Kevin Knox said of Diallo’s performance.

When Diallo went through his struggles during the SEC portion of UK’s schedule, he wasn’t as aggressive off the dribble, and would instead sit in the corner and attempt three-pointers.

Diallo’s struggles on offense would sometimes lead to lapses on the defensive end, which would sit Diallo on the bench for much of the games. In the month of February, Diallo played at least 20 minutes only four times out of eight games.

Against Buffalo, Diallo played offense the way that suites him the best and made minimal mistakes, which led him to play the most minutes he’s played since Jan. 13.

“Everything else was within what we were trying to do, he didn’t lose his mind and all of sudden you’re looking at the player like, ‘Holy cow! If that kid does that on this team, man,’” Calipari said. “Happy for him.”

Calipari wasn’t the only one happy for Diallo, as the players reportedly swarmed Diallo the moment he walked into the locker room after the team had been waiting for him to arrive.

“He was almost mad cause they just – every guy was like standing on chairs, hugging him, it was neat to see,” Calipari said.

So will fans see more of Saturday’s Diallo and less of the SEC Diallo? If he keeps playing defense well and not forcing shots on offense, he could be a key piece in UK’s run through the NCAA Tournament.

In order for Diallo to be that key piece, he’s got to do something simple: Keep doing what he’s been doing and working hard.

“I just got to stay in the gym and just stay – try to play the role that I play for this team,” Diallo said.