Kansas State not worried about UK’s defense, size or Gilgeous-Alexander 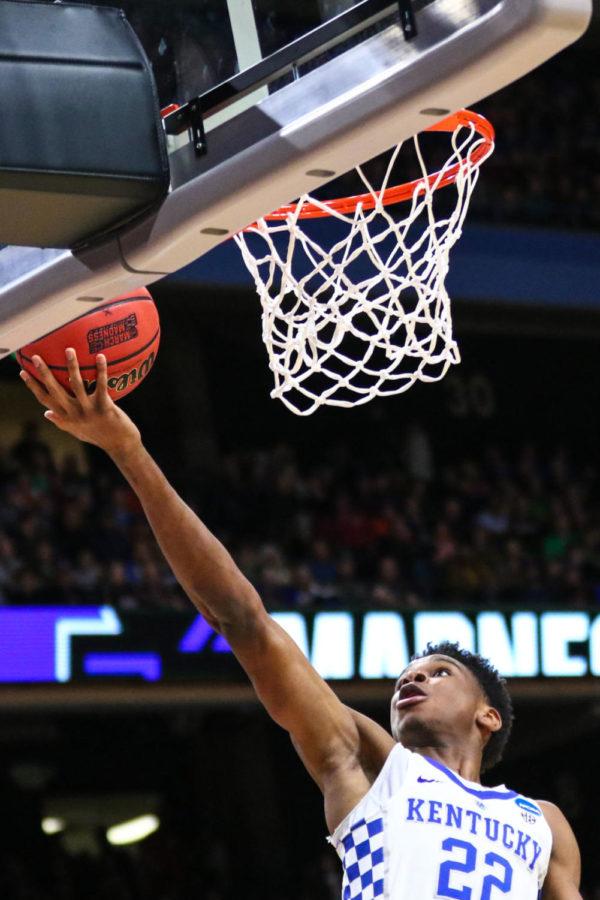 Kentucky freshman guard Shai Gilgeous-Alexander goes in for a layup during the game against Buffalo in the second round of the NCAA tournament on Saturday, March 17, 2018, in Boise, Idaho. Kentucky defeated Buffalo 95-75. Photo by Arden Barnes | Staff

UK has won nine of its last 10 games and is one of the hottest teams remaining in the NCAA Tournament, and UK’s Sweet 16 opponent has noticed.

Before the teams of Wildcats face each other in Philips Arena for a chance to play in the Elite Eight, Kansas State got a chance to speak on what its coaches and players have seen from UK and how they think they matchup.

“Obviously we have a challenge,” Kansas State head coach Bruce Weber said. “I think Kentucky, Coach Cal, does a better job defensively than people give him credit for.”

The defense has picked up as of late for the Cats, as they’ve held opponents under 40 percent shooting in seven of the last 10 games, including all of the games in the postseason.

UK is 15-4 this season when holding opponents under 40 percent shooting, and UK’s two opponents in the NCAA Tournament have shot a combined 39.1 percent from the floor.

“They’re really good defensively right now,” Weber said. “That’s one of my biggest fears for our team, how we’re going to find a way to score.”

The reason UK is able to bother opponents while playing defense is the team’s length. The Cats have six players with over a seven-foot wingspan, and as a team have the fourth largest average height in the country.

In fact, they’re finding holes in it for their offense.

“It’s definitely going to be opportunities for us to get open, just because of the way they play like on steals and blocks and everything,” junior guard Kamau Stokes said. “We’ve got to pick our spots wisely and make the right play.”

A player who uses his length to cause problems on defense is Shai Gilgeous-Alexander. He’s on the top of the scouting report for UK not only for his defense, but also for his offense.

“I’ve been watching him a lot, so I kind of know what he likes to do and where he wants to be on offense, and just trying to attack him on defense, as well,” junior guard Barry Brown Jr. said.

Brown has a specific way he watches film, which has helped him figure out what Gilgeous-Alexander does best as well as exploit his weaknesses.

“I think I start on just isos (isolation plays), see what they want to do in isos, and then I start seeing — then I watch full games and see how they do,” Brown said. “I watch games where they went off and games where they didn’t do so well, just to see how those match up.”

Between UK’s star power, length and other strengths, the Cats of Kentucky will certainly be favorites to walk out of Philips Arena with a victory.

However, the Wildcats from Kansas aren’t worried about UK’s advantages; instead, they’re worried about themselves and what they can control.

“We’ve got to treat it the same way we treat any other game. We can’t go about it any differently,” Stokes said.