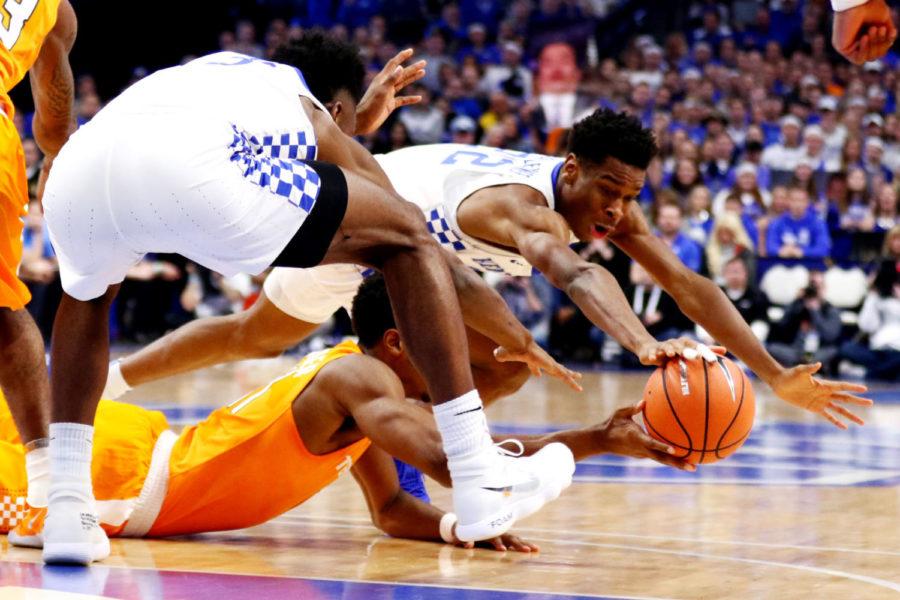 Kentucky freshman guard Shai Gilgeous-Alexander fights for the ball during the game against Tennessee at Rupp Arena on Tuesday, February 6, 2018 in Lexington, Ky. Photo by Arden Barnes | Staff

The SEC Tournament projects to be one of the top conference tournaments in college basketball. Before the Kernel travels to St. Louis to witness the action, sports editor Chris Leach and assistant sports editor Chase Campbell sat down to give their takes on what will do down in St. Louis.

How far does Kentucky go in the SEC Tournament?

CL: Semifinals. I think Kentucky beats whoever they face in the quarterfinals, but I don’t see them getting past Auburn. March is owned by guard-play, and Auburn has gotten as far as they’ve had off guard play. Plus, the No. 1 seed has reached the finals in the past nine tournaments.

CC: Finals. With the even level of play showcased by the SEC this year, I have a hard time believing that Auburn has an easy path to the final game.

Who is the one player UK needs to step up in order for them to make a run?

CL: Hamidou Diallo. When Diallo has played his best, the Cats have been at their best, and UK needs Diallo to play the way he did in December.

Who finishes as UK’s leading scorer during the tournament?

CL: Shai Gilgeous-Alexander. Kevin Knox is the better scorer, but Gilgeous-Alexander is more consistent at putting good numbers in the box score. He’s averaged 16.5 points in his last four games and I expect him to keep that same consistency in the tournament.

CC: Kevin Knox. I don’t know what it is about him, but being away from Rupp Arena usually gets him going. He was UK’s most productive player against Kansas, Arkansas and West Virginia. He travels extremely well, on top of his natural basketball talent.

What team not seeded in the top four presents the biggest threat to make the championship game?

CL: No. 8 Texas A&M. Let’s not forget that A&M was ranked No. 5 in the AP Poll heading into conference play. Yes, the Aggies got off to a rough start in SEC play, but they’ve won seven of their last 10 and could create trouble for Auburn in the quarterfinals.

Read: SEC at an all-time high heading into the postseason

CC: No. 5 Missouri. The potential return of Michael Porter Jr. looms over the rest of the conference like a storm cloud, and if he comes back, Missouri will kick their game into high gear.

Who will be the SEC Tournament champions and MVP?

CL: Tennessee wins the tournament, and Admiral Schofield is the MVP. Schofield has scored over 20 points in his last three games, and I believe he leads Tennessee through this difficult tournament. The Volunteers are one of the more well-balanced teams in the SEC, and they have plenty of players who have bought into their role to help this team accomplish big goals.

CC: Tennessee wins, and Grant Williams will be MVP. The Vols have the easiest path. None of the teams on Tennessee’s side of the bracket scream “excellent post defense and rebounding”, so watch out for Williams to have an extremely productive first few rounds.