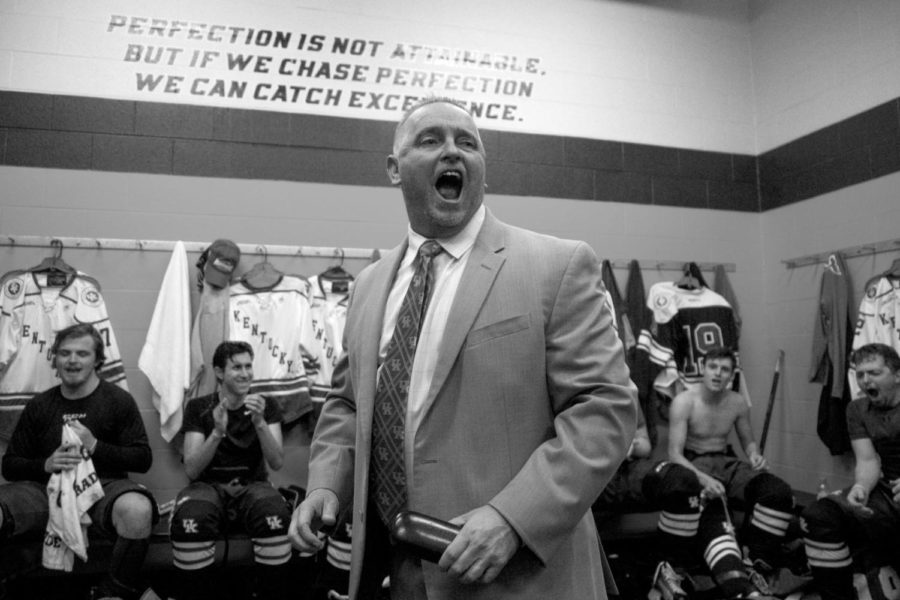 Coach Tim Pergram celebrates in the locker room after they defeated South Carolina in the SEC tournament, the first ever in program history.

The box fan exploded before the stunned locker room, sending a shower of whirling plastic bits to the far end of the room.

“I don’t ever want to see that thing in here again,” said UK Hockey Coach Tim Pergram, the team’s new head coach and the man who had just eviscerated the noisy box fan in one swift kick.

The team sat somewhat shocked, eyeballing the place on the locker room floor where the box fan once sat. It was their first game, and the Cats were leading by four goals, but they had just finished a sloppy, penalty-ridden second period in which they had racked up 22 penalty minutes.

In a short, heated speech, Pergram told his team that just wasn’t good enough. After dragging what was left of the box fan out of the room, an assistant coach chimed in.

“That looked like old Kentucky hockey,” he said. The Cats seemed to take it to heart, as in the final period they wrapped up decisive 8-1 rout of Middle Tennessee State in their home opener last September.

“Old UK hockey” would become a derogatory term in the locker rooms beneath the stands at the Lexington Ice Center. The phrase, and its many expletive-laced derivatives, was often employed by members of the team to describe a lack of discipline, a lack of effort, a lack of wins or a lack of brotherhood. “Old UK hockey” meant failure.

A new coach and a devoted team used the term to enforce a sweeping season-long culture change. The change was not immediate and, in some ways, is yet to be complete. At times, the new faster, more resilient UK hockey shined, but occasionally the “old” boiled over and cracked the veneer.

“Armpit,” one student said decisively, trying to describe the smell of the stands when students packed into the Lexington Ice Center for one of the bigger games of the season. Jammed tightly down rows of gray-painted bleachers, they all stood yelling their favorite Wildcat war cry.

“Ohhhh… C-A-T-S, Cats. Cats. Cats…” screamed the swarm of half-sober, half-claustrophobic students. The blue-and-white horde hurled profanity after profanity toward the ice surface as the team was up two goals on rival Louisville after two periods of good hockey in September.

Double armpit could describe the smell inside UK’s locker room, a narrow room made tense by the fact that the team was in a position they hadn’t been in before. After a period of good play, the locker room is sometimes filled with joking and loud music, but this time, the team seemed focused. There was no music and they talked only of strategy.

Just before taking the ice for the third, one of the more vocal players chimed in—hoping to further motivate his teammates. He reminded everyone of their heartbreaking loss last year to EKU.

“Remember what happened last year?” he said. “We were up four goals on EKU going into the third and we let them back in and lost. That’s not going to happen again.”

After he finished, another player added, “Boys, we haven’t beaten Louisville in five years. Let’s get ‘em this time.”

The previously-stifled Cardinals gained the lead before the period was halfway over, and UK fell to its cross-state boogeymen 4-3. Last year and the seasons prior permeated everything in the early season.

“We went through hell last year and we’re not going to do it again,” said senior forward Aaron Bickle at a November practice a few weeks after the Louisville loss.

The seniors who have stuck around are really looked to as role models trying to help turn the program around, Bickle said.

“Unlike last year, where people were slouching in the locker room two out of three of the periods,” Bickle said. “It wasn’t a fun team to be around.”

He said the team had a bad culture, and as a result many “cancer” teammates left the team.

“There was a large group of kids that didn’t come back and I was not at all depressed about it,” Bickle said. “I like having a fresh slate this year. It’s a lot of young kids that came in—a lot of nice kids, good kids.”

Bickle said he was excited that this change could come just in time for his senior year.

“It’s a whole new team, a whole new attitude, whole new type of focus that I haven’t seen in the three years that I’ve been here,” Bickle said. “I’m honestly blessed that I can finish up my hockey career on this note.”

‘A fraternity of brothers’

“This is a fraternity of brothers now,” Coach Pergram said a day before the team left for the season-ending SEC tournament in Nashville in early February.

The team was riding a four-game win streak into the tournament—defeating Vanderbilt twice, blowing out Tennessee and overcoming a highly-touted Georgia team. The Cats entered the SEC tournament as the third seed.

In the first round, a third-period rally propelled the Cats to an 8-4 victory over South Carolina. They played cards and Fortnite after the game, and the team was confident and in high spirits, but they still had work to do.

Senior defenseman Remi Paine sat on the floor of a hotel room doing his homework while about eight of his teammates took turns playing video games.

Hockey and travel can be tough to balance with school. Paine suffered a concussion on a swing of away games earlier in the season and missed about three weeks.

“The hardest part was actually classes,” Paine said after his injury, explaining that it was extremely hard to focus at times.

“I don’t sleep that much anymore,” freshman forward Mike Deangelis said of his attempts at balancing sport and school.

The team practiced at least twice a week, often beginning at 9 p.m. when the only ice rink in town wasn’t being used by anyone else. Practice times, late night games and the sometimes demanding travel schedule can make it hard to study.

“We try to sit down together,” said senior forward Beck Schultz, explaining that the team often tries to study together, especially on road trips to make sure everyone stays on track.

Schultz, a landscape architecture major with long studio classes throughout the week, said balancing school with the club can be “a fine line.”

But sophomore goalie Jeffrey Ison said that it’s all “definitely worth it when you’re not 3-20 like last year.”

This season, the team notched 20 wins, nine losses, one overtime loss and a tie. Through 31 games, the team netted 160 goals and averaged 5.2 goal per game—a substantial increase from last year.

At their hotel and on the bus, they ribbed each other with jokes about hockey, video games and their love lives.

The team travelled to O’Charley’s for lunch before they took on Arkansas in the tournament semifinals. The long charter bus they were riding in was erupting with excitement. The back of the bus roared to life when the team found out a player had a first date coming up.

“Take her to Movie Tavern,” someone yelled. “Use three-in-one shampoo,” another said. “Be yourself,” the back of the bus yelled sarcastically, offering advice to the player.

“Bus fight!” someone else suddenly called out as the bus rolled into the O’Charley’s parking lot. The team bus of the recently-defeated South Carolina Gamecocks was also sitting in the lot. But there was no fight; the teams merely exchanged glances across the restaurant.

UK lost to Arkansas later that day and would lose the third-place game. Despite the end to the season, the culture change was successful. Senior forward Beck Schultz finished the season ranked 10th nationally in scoring, and freshman forward Jordan Shannon finished 26th.

“The guys really bought into each other and realized that we can compete with any team we play against,” Shannon said.

Pergram travels across the country recruiting new players. Nine new players were added to the team mid-season. He said to expect more next year.

“Going to be a little bit bigger,” Pergram said. “Going to be a whole lot faster and we’re just starting to scratch the surface.”