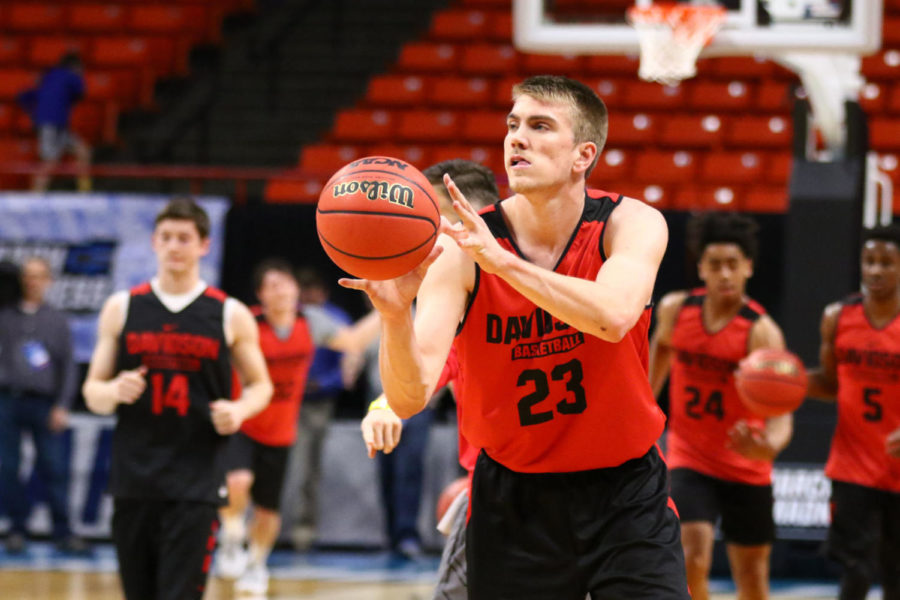 Davidson senior forward Peyton Aldridge shoots a basket during Davidson's open practice on Wednesday, March 14, 2018, in Boise, Idaho. Davidson will play Kentucky in the first round of the NCAA tournament on March 15. Photo by Arden Barnes | Staff

UK’s first round matchup of the NCAA Tournament is against No. 12 seed Davidson, and everybody knows the 12-seeds can be dangerous in the first round.

In the past 10 years, 12-seeds have won 18 of the 40 matchups between 5 and 12 seeds. At least one 12-seed has taken down its first round opponent in nine of the last 10 NCAA Tournaments.

Davidson certainly has the capability of pulling off the upset, led by a veteran head coach and a well-balanced offense. Tipoff for the game is at 7:10 p.m. ET and it will be aired on CBS.

McKillop has been coaching basketball since 1973 but has spent the last 29 years at Davidson. In his time at Davidson, McKillop has a record of 516-313 and has guided his Wildcats to nine NCAA Tournaments.

Of the previous eight appearances, Davidson has only made it out of the first round once, which was in 2008 when Stephen Curry led the Wildcats to the Elite Eight.

The top player for UK to watch out for is Aldridge. The senior forward from Ohio has led Davidson all season and has picked up his game as of late.

In the last five games, four of which have been against NCAA Tournament teams, Aldridge has averaged 27 points and nine rebounds per game. Aldridge dropped 45 points and 12 rebounds against St. Bonaventure on Feb. 27, which was a new career-high for points.

On the season, Aldridge has scored more than 30 points in five games, four of which have come since Feb. 6.

One thing UK’s defense does well is prevent teams from shooting threes, but that is an area in which Davidson excels.

Davidson usually gets open looks from three due to the players’ non-selfish style of offense, as they average 16.8 assists per game. At the same time, Davidson only turns the ball over 9.6 times a game, which is the third lowest mark in the NCAA.

In the NCAA Tournament, sometimes the games come down to who can make free throws, and if that happens for Davidson, they should feel comfortable.

Davidson has knocked down 80 percent of its free throws this season, which is the third best percentage in the country. Kentucky shoots at a 70 percent clip from the free throw line, which is just inside the top 250 in the NCAA.

Davidson has four players who at least shoot 80 percent from the charity strip, led by Pritchett who has made 22-24 free throws this season. Aldridge has shot the most free throws (138) for Davidson, and he’s made 85 percent of those shots.