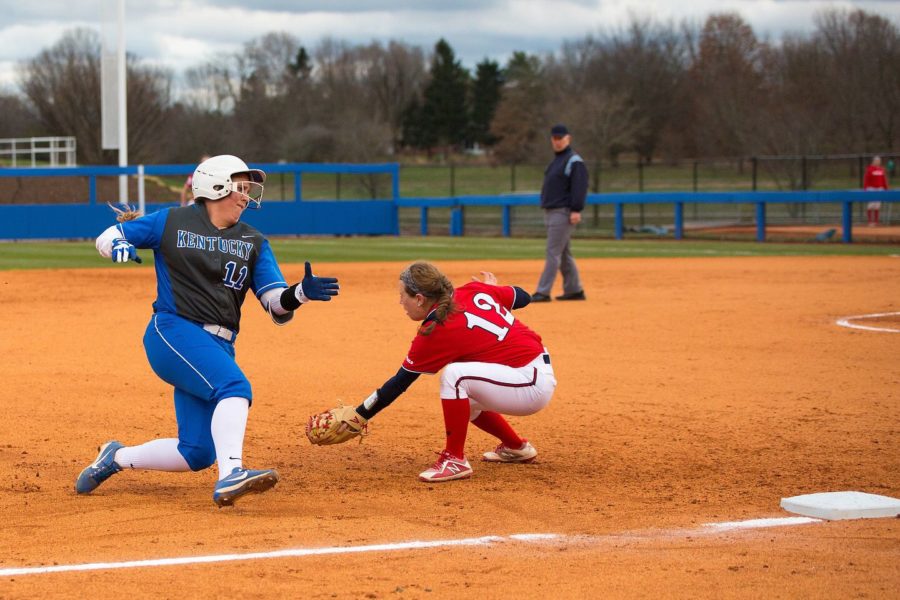 Abbey Cheek slides into third base for one of her two triples against Dayton in Kentucky's home-opener at John Cropp Stadium in Lexington, Ky. on March 1, 2018. Photo by Jordan Prather

The cold, dreary and windy day at John Cropp Stadium didn’t stop the UK softball team from grabbing a 4-1 win in its home opener against the University of Dayton Thursday evening.

“I thought this was a good game for us, especially for our home opener. I thought we started out great,” said Kentucky head coach Rachel Lawson.

The Cats didn’t allow a run until the top of the sixth inning when a Dayton batter was hit with a pitch with the bases loaded. Kentucky totaled nine hits while allowing four.

In an overall successful game at the plate for the Cats, Abbey Cheek was a key player for Kentucky in Thursday’s victory as she went 2-3 with two triples and two RBI. She now holds the stat for second-most triples scored in a game in program history.

The first scoring play for Kentucky came in the first inning when catcher Jenny Schaper singled to the right side and brought in Erin Rethlake. Schaper went 2-3 at the plate, along with Cheek, Rethlake, and Brooklin Hinz.

The second inning added another run with a Hinz single up the middle, scoring Alex Martens.

“I was just really focused on seeing the ball, and once I hit it really hard I was just running until they told me to stop,” Cheek said.

Lawson said at the start of the day, she wouldn’t have thought Cheek would hit two triples in today’s game, but it was a testament to both her base-running and ability to hit the ball.

“I think Abbey surprises a lot of people because she’s so big and strong, but she’s an incredible runner. She’s a fantastic athlete, if she was a man she’d be worth millions of dollars,” Lawson said.

Kentucky is back in action this weekend at home in the John Cropp Classic. Saturday’s play will consist of a double-header against Ohio University and Southeast Missouri, starting at 1:30 p.m. They will conclude their weekend on Sunday with another game against SEMO at 12:30 p.m.