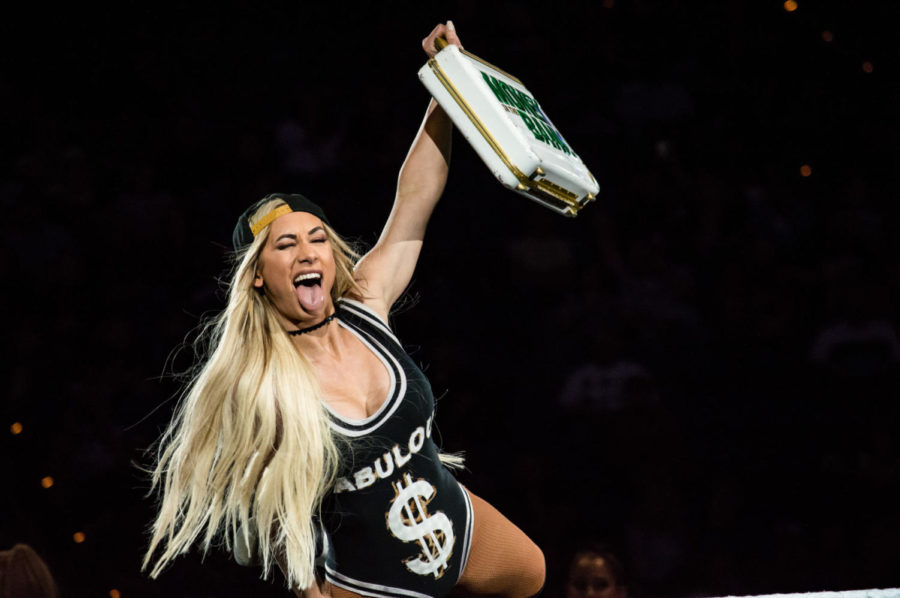 WWE Superstar Carmella shows her "Money in the Bank" briefcase to the crowd on Sunday, April 1, 2018 in Lexington, Ky. Photo by Edward Justice | Staff

The semester here at UK is almost over and we will all be able to enjoy summer soon enough. Take this time to kick back and relax as you turn on the TV and watch some WWE television.

This is also the time of the year when WWE shakes up its roster and trades superstars back and forth between Raw and Smackdown. This is the second year that WWE has done this following their WrestleMania show, which marks the end of the wrestling year.

Last year’s shake-up we saw Raw gut Smackdown from some of its top talents as Smackdown had a great year in 2016 following the initial draft. This year it’s quite balanced when it comes to the shake-up. Here are the results of who ended on what brand:

Jinder Mahal and The Singh Brothers

The Ascension (Konnor and Viktor)

There have also been some returns and call-ups that took place last week after WrestleMania. On Raw, we saw the return of Bobby Lashley and some NXT call-ups in Ember Moon, No Way Jose and The Authors of Pain. On Smackdown, we only saw an NXT call-up from The Iconic Duo in Peyton Royce and Billie Kay.

Smackdown definitely won the shake-up this year and we can all rejoice as Raw has some competition this year. Raw has some good talent, too, but with Smackdown being only two hours and going off what they did in 2016, it’s going to be another good year.

And we can’t forget about the Empress of Tomorrow joining the Smackdown women’s division along with Absolution’s Mandy Rose and Sonya Deville in the fold. We haven’t seen Asuka since her WrestleMania defeat to Charlotte, and adding her to Smackdown was a great idea because it gives her new opponents, like Becky Lynch, Carmella, and her WrestleMania opponent, Charlotte. Rose and Deville are once again joined with their Absolution founder Paige, who is the new general manager of the blue brand.

Raw already had a stacked roster and is still looking good with the talent they have. With Brock Lesnar, Roman Reigns and Braun Strowman as the most notable keeps on the show, the addition of Bobby Lashley, Kevin Owens and Sami Zayn adds to the main event scene. A Lashley and Lesnar match is something that has been rumored around the internet for some months now and with the two on the same brand, it’s very possible we can see that down the line. After Zayn and Owens lost their match at WrestleMania, it was apparent that the two were going to go red. This could be a remix of what we saw in 2016 with Owens and Chris Jericho. This time around Owens could possibly turn on Zayn or Zayn could turn on Owens.

The Raw tag team division hasn’t been that impressive and the shake-up just made it more of the same. They gained Breezango and The Ascension, but there was a hint at a new tag team in Drew McIntyre and Dolph Ziggler when the two made their debuts on the show attacking Titus Worldwide. McIntyre is just returning from an injury that he suffered while down in NXT and the pairing with Ziggler could be very interesting.

Ember Moon and Natalya join Raw’s Women division, along with the Riott Squad (Ruby Riott, Mandy Rose and Sarah Logan). Moon was a star down in NXT, wowing the fans with her finisher, The Eclipse, bringing her up to go against Alexa Bliss, Bayley, Sasha Banks and the Raw Women’s champion, Nia Jax. This is going to make some interesting matches. Throw Natalya in there with the Riott Squad and their ambushes and you have a solid women’s division.

As part of the shake-up, there were some that needed the brand switch and it could help their career.

On Raw, the most noticeable standout that didn’t even get featured on TV was Chad Gable. Gable split with Shelton Benjamin (who is on Smackdown) and will begin his long-awaited singles career that the internet darlings have been crying for. Gable has the crisp in-ring work, Olympic background and the sharp comedic timing similar to Raw’s general manager, Kurt Angle. A possible Intercontinental title push and a feud with Jason Jordan could be down the line for Gable as he looks to make 2018 his year.

On Smackdown, the standout is the seven-footer, Big Cass. Cass is returning from an injury that sidelined him for half the year mid main event push. We saw what a main event version of Big Cass could look like when he was featured in the fatal four-way for the Universal title in 2016 and it was impressive. It seems that the WWE wants have a program for Cass and Daniel Bryan, which is not bad considering the two have never faced one another before and it plays up on the David versus Goliath storyline. Cass could be featured in the WWE title picture this year or maybe even win the Money in the Bank, but this could be wishful thinking.

With all the moves between the two brands, it seems that Smackdown has the talent and potential to overthrow Raw and become the A-show once again.