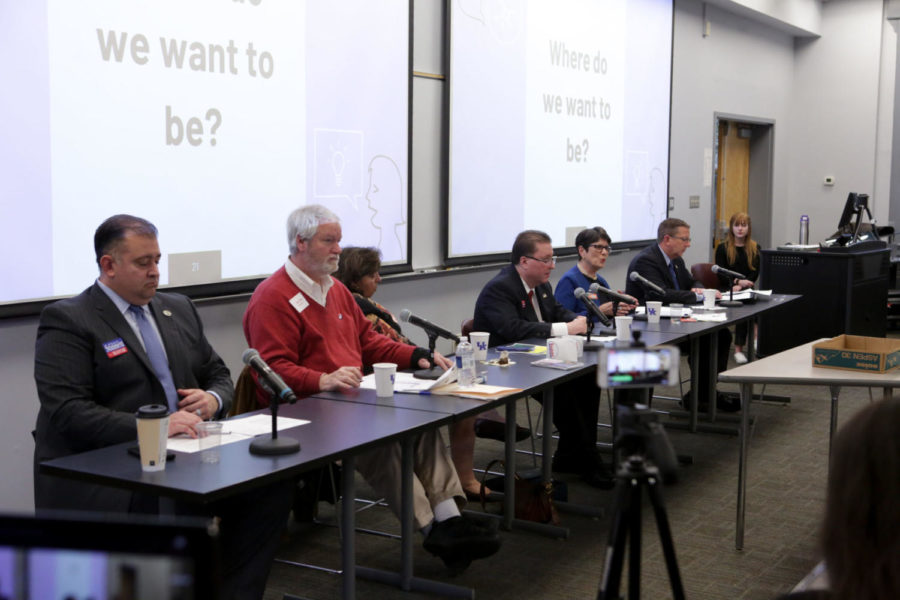 As Mayor Jim Gray steps aside from his current role in Lexington to run for a seat in Congress, seven candidates have stepped up to run for his place.

The forum was put together by journalism professor Buck Ryan’s JOU 101: Introduction to Journalism class and sponsored by UK’s Student Government Association. Candidates took time to deliver their stance on the current state of Lexington and what they intend to improve and change.

“I was hearing nothing about the mayor’s race,” Ryan said. “It’s virtually tomorrow. This was just a way of waking up the campus.”

UK faculty members and students, along with students of the class, attended the forum to hear the candidates’ views and take an opportunity to ask questions regarding the future of their city.

“I think Buck did a really great job at keeping it entertaining,” said Julie Volpenhein, program coordinator and JOU 101 student. “Especially considering with a lot of these students, this may have been their first experience really interacting with local government.”

According to former Vice Mayor Linda Gorton, the candidates attended the forum on campus to introduce themselves and their ideas to the students and faculty as they see both education and active participation from younger generations as an important part of politics.

“College students are our future,” Gorton said. “You all are preparing for future jobs and future positions in the community. A lot of you are voters and I think that talking about different ideas with different generations, college students and staff members, is critical to the health of our community.”

“We wanted to look at where Lexington is now as a community and compare it to some other similar communities across the country,” Young said.

The statistics were gathered by looking at every county in the U.S. They then narrowed the counties down to counties within 125,000, more or less, than Lexington’s population. After this, they matched the counties to compare to Lexington Fayette County by integrating the qualification of containing a major university.

“We found 33 counties across the entire country that are pretty good matches with Fayette County,” Young said.

Candidates delivered their opinions in response to Young’s presentation and provided the ways they were going to improve the city if elected mayor and highlighted ways in which the city has thrived in the past.

“First of all, UK is our largest employer in Fayette County,” City Councilman Kevin O. Stinnett said. “If it wasn’t for UK in 2009 and 2010 creating 1,300 jobs, we would have been in real trouble in this recession.”

Following a brief break, candidates were open to answering questions from members of the audience. Audience members such as JOU 101 student Grant Wheeler asked questions relating to education and what the candidates plan to do to keep students and teachers safe in a healthy educational environment.

Of all the present candidates, the four most common talking points were jobs, education, traffic and drugs. Candidate Skip Horine made clear that one of the issues he wants to tackle in Lexington is police corruption. Among the candidates is former Lexington Police Chief Ronnie Bastin.

“We don’t have police corruption in Lexington,” Bastin said. “Those allegations are unfounded.”

Lexington will have its primary elections for mayor, city council, county commission and local judgeships on May 22. General elections will take place on Nov. 6, 2018.