Campus ‘Dancing Kid’ wants to become friends with his fans 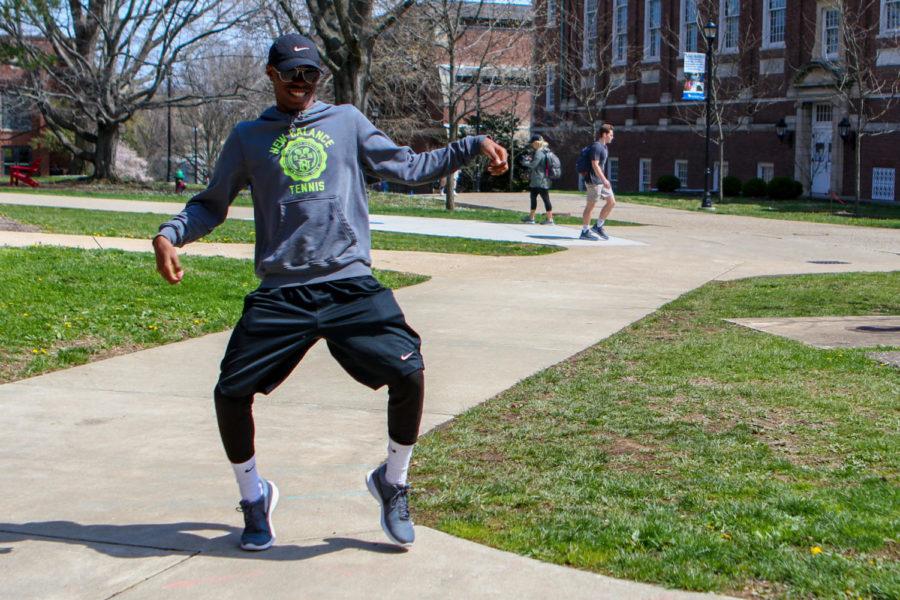 Tayvho Akpan, a University of Kentucky student studying music production, is known on campus and across Lexington as the "Dancing Kid." Akpan never danced for the attention, but rather for his long-standing passion for music.

Tayvho Akpan was waiting at the bank at Nicholasville Mall, anxiously awaiting to find out if his check, which was over 60 days old, would successfully go through.

After receiving word that his check went through at the bank, Akpan decided to celebrate. He did his usual thing and danced all around the mall, and to his surprise, people started to throw money at him.

Akpan, a UK student studying music production, has become known for his enthusiastic dance moves around campus and in public. It was a major hit and caught the eye of many UK students. He has been the subject of many Snapchat stories and has become known as “The Dancing Kid.”

“First time I saw him, I was walking to my early morning class, and he absolutely made my day better,” said freshman Holden Treadway.

Even though he has caught many people’s attention with his dancing, Akpan did not even notice the recognition at first.

“I didn’t even realize people were taking recordings of me, I’d see them and be like, ‘Is this me?’” he said.

Akpan’s love for music has been a big part of his life and he played the violin in orchestra growing up. He started to dance publicly when he got to college and never did anything like it in high school.

He never was doing the dancing for attention; rather, he would dance to the music because he has always had a passion for music.

“I just do it for fun, and it is really just for myself,” Akpan said.

He has been making and producing music since the seventh grade and wants to do that for a career when he is older, so he is majoring in music production.

Akpan does appreciate all the fame and recognition he has received from his dance moves. He said that he is glad he has all these fans, but what he really wants is to become friends with them.

“I want to be a friend, and once people see who I actually am, we can go out to eat and hang out and stuff,” Akpan said.

He said that even though people see him as “The Dancing Kid,” he wants people to meet him and see just more than just that.

“I know everyone calls me ‘The Dancing Kid’ but I prefer people to call me Tayvho,” he said.