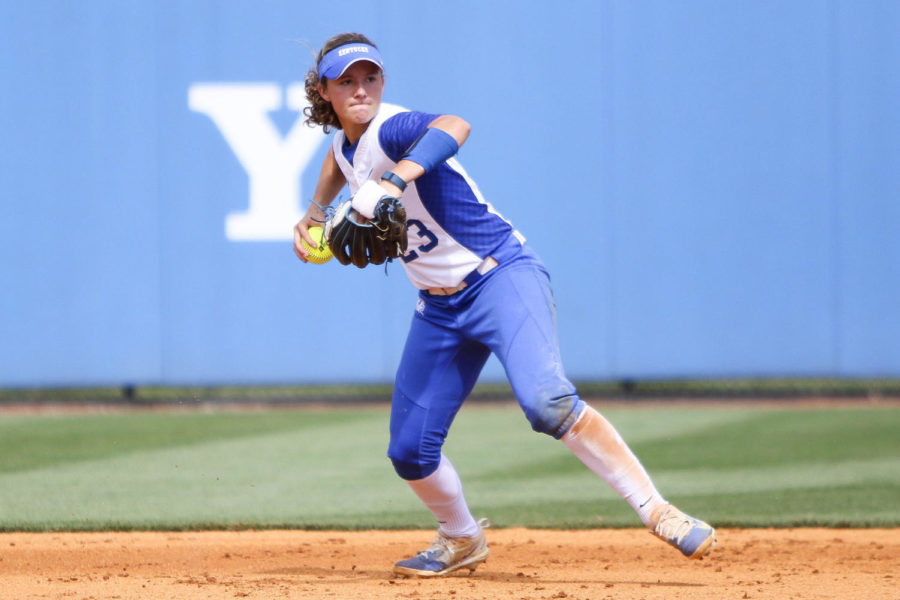 Kentucky Wildcats short stop Katie Reed throws the ball to first base during the second inning of game two of the Lexington Regional at John Cropp Stadium on Friday, May 19, 2017 in Lexington, KY. Photo by Addison Coffey | Staff.

The now 25-11 Kentucky softball team added two more wins to its record as the Cats took both games of their double-header against Middle Tennessee State University Friday evening.

The Cats made it look easy at the plate as they earned 12 runs on 12 hits against the Blue Raiders in their 12-1 win in game one.

Autumn Humes played big in the circle, only allowing three hits and one run from MTSU.

The Blue Raiders were the first on the board, scoring their only run of game one on an RBI single in the top of the first inning.

Kentucky scored a total of five runs over the course of the first three innings and outscored all three in the fourth inning, when the Cats scored seven runs off five hits.

Brooklin Hinz was a key player for the Wildcats in game one as she earned four RBI from a home run in the second inning and a double in the fourth.

Bethany Todd made her second start of the season for the Cats, allowing only two hits and zero runs in Kentucky’s 10-1 win over the Blue Raiders in game two. The victory will also count as Todd’s first career win.

“I felt pretty confident, I know that my team has my back at all times, so I felt pretty good going out there,” said Todd.

“For her to be able to go in there today, and hasn’t seen any innings lately, to come in and get a complete game, that really says a lot about her toughness,” said Lawson.

Kentucky scored early in the first inning on an RBI single by Jenny Schaper. Shortly after in the second inning, Katie Reed came up big for the Cats and hit her first career grand slam to take her team up to a 6-1 lead.

Three runs were added to the board for the Cats in the fourth inning, but two winning runs came in the sixth from an Abbey Cheek walk-off home run. The homer makes for Cheek’s 10th of the season, making her the second player in program history to have at least 10 home runs in three different seasons.

UK has a four-day break coming up, which Lawson says everybody is looking forward to, before they face EKU again on Tuesday.

“We’re a little bit beat up right now, so anytime you can get a little bit of a break during the middle of the year, that’s good,” Lawson said.

Kentucky will look to defeat EKU for the second time this season on Tuesday at 6 p.m.