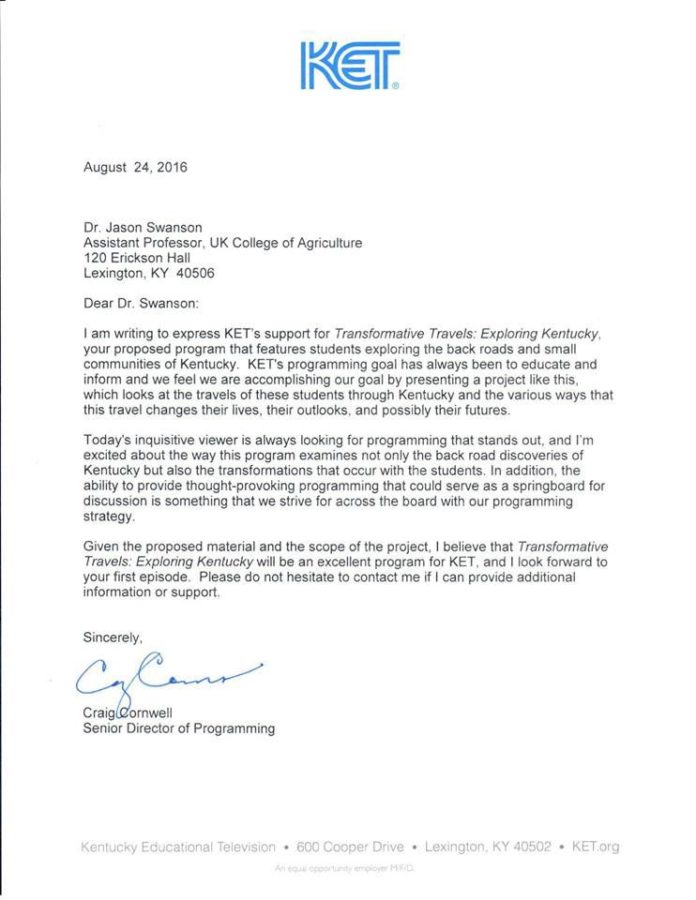 Can you imagine being on a reality television show and receiving school credit for it? Well, the College of Agriculture launched a course for you to do so.

After taking students on multiple trips abroad, Dr. Jason Swanson was interested in doing the same, but instead here in Kentucky. As a professor in the Retailing and Tourism Management Department at UK, Swanson is interested in how travelers are impacted through their travels. He believes students don’t need to go abroad or step on an airplane to have life changing experiences. There’s a lot to experience and learn from without going far.

During this past spring semester, ten students from various majors and grade levels met once a week to discuss and prepare for the trip. On May 6th, they will begin their six-day excursion across Kentucky.

After developing this course, Swanson proposed the idea to produce a television series for Kentucky Educational Television (KET). Not only did the network accept the proposal, but the Senior Director of Programming personally wrote a letter to share the excitement and support for it.

This means as the students explore the back roads of Kentucky, they’ll be accompanied by a camera and production crew the entire time. Doug High, who is an Executive Producer associated with Wrigley Media Group, is in charge of the production. There will also be an editor and field producer who travel with the students, take notes, and put together the stories for each episode.

In a few days, the exploration begins. From the starting point in Lexington, the first stop is Horse Cave. The group will visit Hidden River Cave for zip lining and rappelling.

The next two nights will be spent in Barren River State Park. Activities include kayaking, canoeing, and most importantly, visiting Kenny’s Cheese Farm where dairy cheese is made.

There will be a day trip to Bowling Green where the students will be split into teams to play in the authentic Railpark’s Escape Games in historical rail cars.

The trip continues with a day drive to Wickliffe, where Two Rivers Fisheries is located. Here is where Asian carp, an invasive species in Kentucky, is processed. The next couple of nights will be spent in Land Between The Lakes and Kentucky Dam Village.

A day will be spent in Paducah at farmers’ markets and participating in a cooking challenge. The students will learn about local foods and ways to cook, especially when on the road. The trip will end with one last night in Kentucky Dam Village before they return to Lexington.

“What I’m most excited about is it’s working and coming together,” says Swanson. “This project is two years in the works. There are a lot of pieces and behind the scenes work with raising money and planning the logistics with travel.”

This trip is basically an education abroad program done domestically. It’s different and creative. It has a reach and makes an impact. The perfect combination for a KET program.

The air date of Transformative Travels: Exploring Kentucky has not been released, but look forward to six 30-minute episodes to come soon on KET.