UK baseball evades sweep in final match against No. 1 Florida 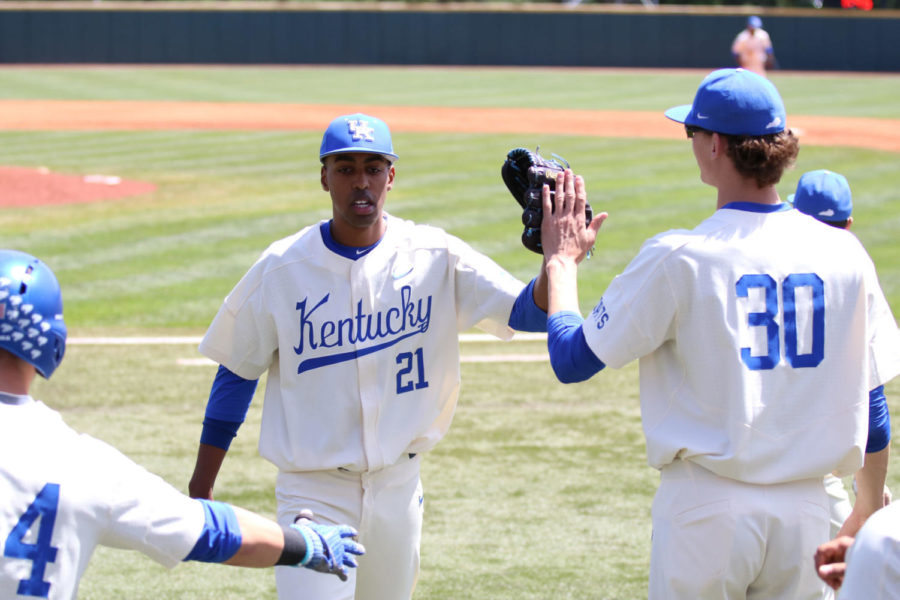 Junior Justin Lewis high fives his teammates on his way back to the dugout during the game against Florida on Saturday, April 21, 2018 in Lexington, Ky. Kentucky won 3-1. Photo by Chase Phillips | Staff

In the final game of the three-game set on Saturday, the No. 6 UK Baseball team evaded a series sweep with a 3-2 win.

4,461 fans showed out for the warm series finale, a beautiful day for baseball at Cliff Hagan Stadium. This marks the second-highest regular season attendance in school history.

“When we compete and we do the things that are within our system, our team is really really special,” head coach Nick Mingione said after the win.

Florida’s Wil Dalton started his assault on UK’s pitching in the third after Hjelle loaded the bases on walks and promptly hit a three-run triple to center.

When Dalton stepped to the plate in the eighth with freshman Jimmy Ramsey on the mound, he crushed a ball off the foul pole in left field. Jonathan India also hit a home run, giving the Gators a massive lead.

The Cats scored three runs late in the game, including at two-run blast from Kole Cottam but UK fell short 9-4.

The Friday loss gave the Cats their first series loss at home this season.

In the final game on Saturday, junior righty Justin Lewis got the start.

Lewis recorded eleven strikeouts and allowed only one run in his eight innings pitched.

“Every game matters,” Lewis said. “That’s why I don’t ever feel any pressure. You’ve just gotta go out and do your thing.”

“I prepared all week leading up to the start and that’s what I tried to do. I know my offense and defense always have my back so I just gotta go in and throw strikes and give my team a chance,” Lewis added.

Lewis’ outing was the most successful of any starter in the series. He recorded the most strikeouts and allowed the least amount of runs.

UF’s only run on Lewis was in the top of the fifth after a balk and an errant throw allowed Nick Horvath to score.

The Gators scored again in the top of the ninth when Chris Machamer came in for relief for the Cats. JJ Schwarz smacked a ball out to “the Cliff” to bring the Gators within one run of typing it up.

The Cats scored a run in each of the first three innings with RBI’s from Troy Squires, Luke Heyer, and Ben Aklinski. They attempted to get some insurance throughout the remaining innings but could not tie anything together.

The Cats play the Morehead State Eagles on Wednesday before the Mizzou Tigers come to town next weekend.

The first pitch for the midweek game is scheduled for 6:30 p.m.