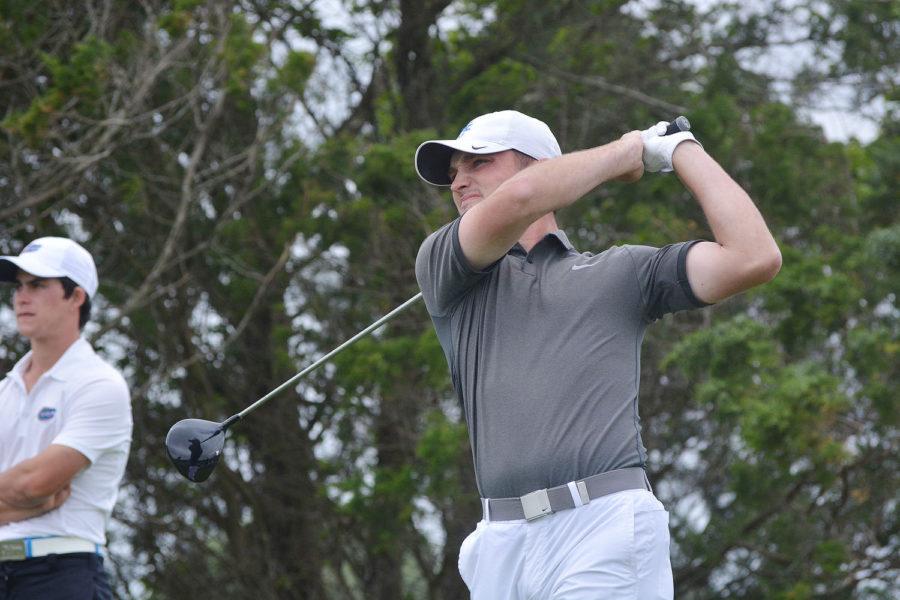 Tyler McDaniel during the second round of the Southeastern Conference Championship at Sea Island Golf Club's Seaside Course in St. Simons Island, Ga., on Saturday, April 16, 2016.

To conclude regular season play, the UK men’s golf team finished in first place out of 13 teams by shooting 35-under par in a 54-hole event at the Gary Koch Invitational in Gastonia, North Carolina.

This was UK’s fourth victory of the season, and they had to come from behind against No. 11 Auburn to do so.

The 14-under par final round was the second lowest score from the Cats all season, and third lowest score since Brian Craig took over as head coach.

“I am so proud of these young men,” Craig said in a press release after the final round. “What a fabulous final round we played today to come from behind and beat a terrific Auburn team.

At the two-day event, Chip McDaniel placed second in the individual standings with a 15-under par performance, just one stroke behind Trace Crowe of Auburn. McDaniel led the individual leaderboard after the first 18 holes by shooting a 66, six-under par.

McDaniel slipped to second after Crowe shot a 63 in the second round to take the lead for good. McDaniel followed up his six-under par first round by posting another 66 in the third round.

McDaniel sunk 14 birdies the first day and made six more on Tuesday to secure second place.

“Chip McDaniel was fantastic today,” UK head coach Brian Craig said in a press release after the first day. “He has been working hard and it was great to see it pay off today.”

Maximillian Mehles was UK’s second best performer as he finished seven-under par, good enough to finish tied for third. UK had three golfers finish in the top 10, and all six competitors for the Cats finished in the top 22.

The only golfer for UK who didn’t count towards the Cats’ team score was Evan Cox, who finished tied for 14th.

Lukas Euler, who finished in 17th place, made two eagles during the tournament. Both of Euler’s eagles were on hole No. 1 in the second and third round.

No other UK golfer made an eagle, and there were a total of 21 eagles made during the two-day tournament from all competitors, including Euler.

After the first day and 36 holes, Kentucky shot a 21-under par and sat to second place, trailing Auburn by six strokes. The Cats led third place Florida State by 17 strokes. Six UK golfers sat in the top 15 individual standings after 36 holes.

The Cats will next head to St. Simons Island, Georgia, from April 25-29 for the Southeastern Conference Championship. UK finished 11th in last year’s SEC Championships.