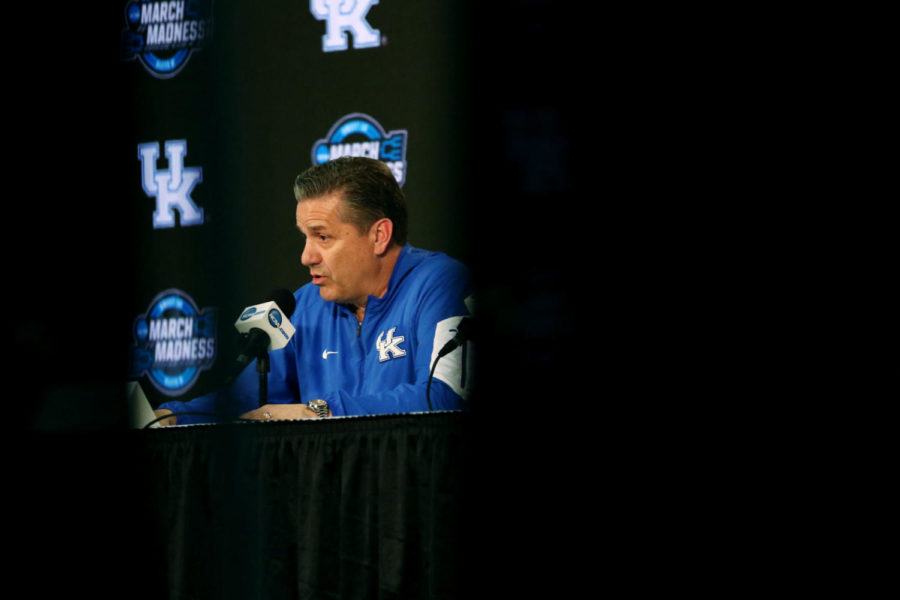 Kentucky head coach John Calipari addresses the media during the press conference before Kentucky's open practice on Wednesday, March 21, 2018, in Atlanta, Georgia. Kentucky will play Kansas State in the Sweet 16 game in the NCAA tournament on Thursday, March 22, 2018. Photo by Arden Barnes | Staff

After seven months of research and debate, the Commission on College Basketball released a 60-page report of recommendations on how to fix college basketball’s biggest problems.

The recommendations ranged on topics such as the “one-and-done” rule, enforcement of violations and use of agents. Former Secretary of State Condoleezza Rice shared the commission’s report to the NCAA’s Board of Governors and Division I Board of Directors on Wednesday.

According to Adrian Wojnarowski of ESPN, the earliest that a rule change like the commission’s suggestion could happen would be before the 2020 NBA Draft.

The commission’s members did say that if the one-and-done rule doesn’t change for next basketball season, they would consider options for the NCAA, such as locking up a player’s scholarship for three or four years if the player leaves a program after their freshman season.

UK’s head coach John Calipari, one of the top recruiters for one-and-done players, reportedly met with the NBPA recently to start the process of removing the one-and-done rule. Calipari has been an advocate for ending the one-and-done system long before the commission released its report and has shared his ideas on how to get this done many times.

Other recommendations the commission made were to create a program where certified agents can be made available to high school players through their college careers, run their own summer recruiting events with the support of the NBA and USA Basketball and request greater transparency from shoe and apparel companies from a financial standpoint.

The release of the recommendations caused reactions on Twitter from the NCAA and NBA, associations that would be affected from these potential rule changes.

“The NCAA appreciates the thorough review and comprehensive work by the Commission on College Basketball. The Board of Governors and Division I Board of Directors will now review the independent commission’s recommendations to determine the appropriate next steps,” the NCAA said in a statement.