Rupp Arena crowd experiences ‘An Evening with the Eagles’ 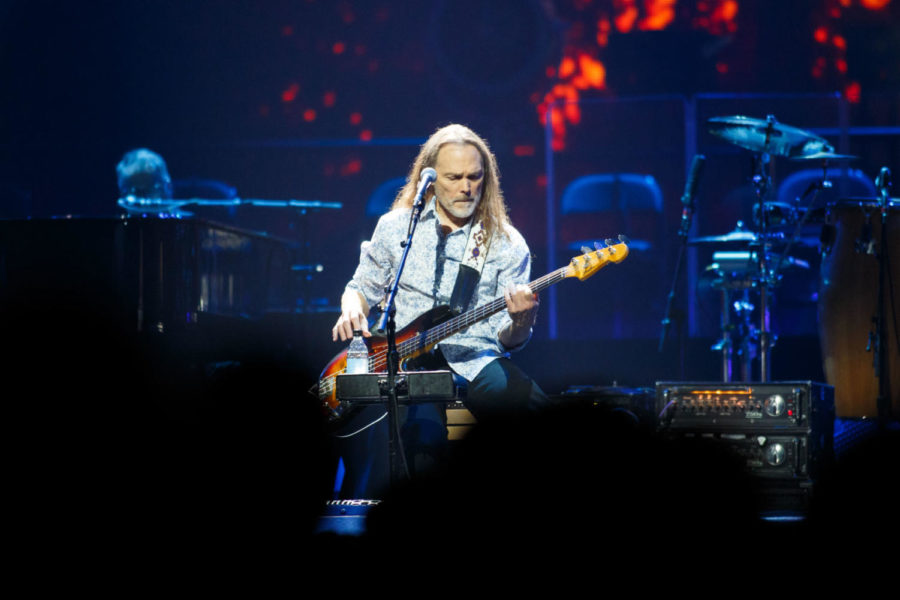 The Eagles play a concert in Rupp Arena on Tuesday, April 10, 2018 in Lexington, Kentucky. Photo by Jordan Prather | Staff

The Eagles did not disappoint Tuesday night as they filled Rupp Arena with nostalgia that could be felt all the way back to Hotel California for a nearly packed house.

The performance was a stop for the band along its “An Evening with the Eagles” tour, which is set to go through October, according to the band’s tour schedule.

JD & The Straight Shop, who had been pegged as the opening act, did not make a debut for unknown reasons.

Don Henley began with thanking the crowd for the opportunity to be in this “beautiful part of the country during spring, maybe,” giving some insight that he understood Kentucky’s weather.”

The band was formed in 1971 and became a household name throughout the decade. The members who founded the group included Henley, Glenn Frey, Bernie Leadon and Randy Meisner. According to Billboard.com, five No. 1 hits topped the charts by 1979: “Best of My Love,” “One of These Nights,” “New Kid in Town,” “Hotel California” and “Heartache Tonight.”

Walsh nearly sent his fingers into arrest performing guitar artistry. Henley brought the deep vocals to “One of These Nights.”

Schmit did perform with a noticeable “ski boot” which was due to a fall he had taken in a shower days previously. When asked about it by Henley for explanation, Schmit said, “I fell in the shower and couldn’t get back up.” Henley replied with a comment that he may need to find an alert button while Walsh did a comedic version of “The Scream” face to the story.

A prominent member of the band was absent and could be a reason for attendees to be left wanting for the experience they may have received had they heard the band’s heyday. Glenn Frey, who passed away in January 2016 due to complications of rheumatoid arthritis-acute ulcerative colitis and pneumonia, according to coverage by the Washington Post, could be remembered only in spirit.

In 2016, The Washington Post reported Don Henley as saying the band was finished after Frey’s death.

“I don’t see how we could go out and play without the guy who started the band,” he said.

The band has managed to come back into touring with the memory of Frey still being a very much physical manifestation in the form of his own son, Deacon Frey, who joined the group last year during summer shows.

“It seems like enough time has passed that we can try this out as an experiment, I suppose, and see how it works,” said Henley to Variety magazine.

Deacon Frey did an honorable performance to several of his father’s lead songs, including “A Peaceful Easy Feeling.”

Vince Gill, a country singer who has accumulated 21 Grammys according to his website, was asked to help the band carry on in the absence of Glenn Frey.

According to an interview he did with Rolling Stone, “From what I’ve been told by Don, I was the only consideration. But I didn’t think they’d do it,” said Gill.

Gill said he was glad to be back in the Bluegrass and had lived in Lexington around the age of 18, while explaining he was also a fan of the band himself and had purchased its first record back in the seventies.

The band will be playing the Spectrum Center with JD & The Straight Shot Wednesday night in Charlotte, North Carolina, according to their website.