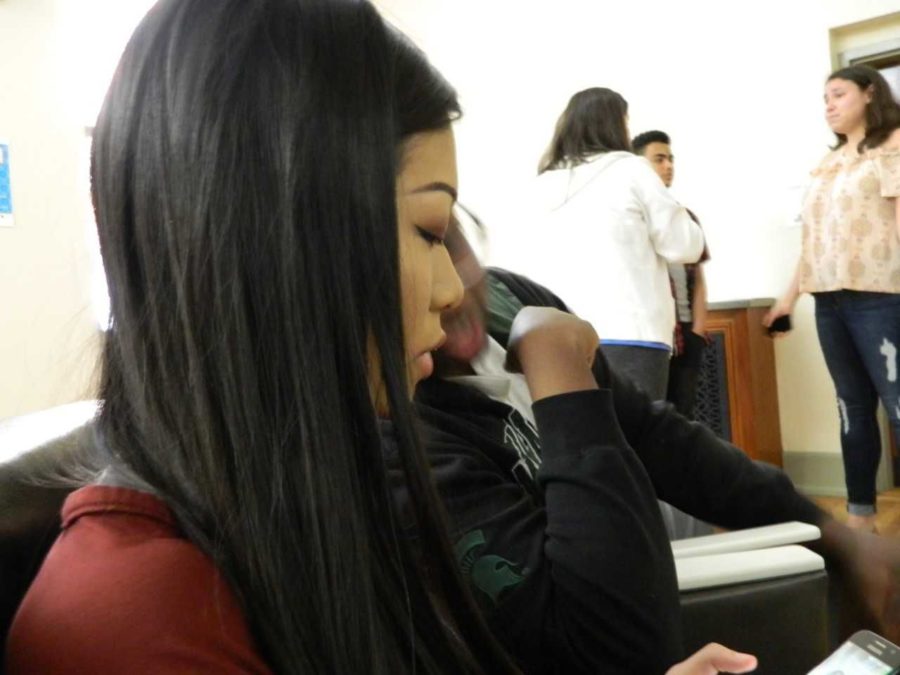 Emma Collins, a member of the LEXengaged LLP, searches her phone for a second poem to share after her first moved herself and audience members to tears.

The scene was set: shades pulled, lights off, fairy lights on. About 40 students filled the room, all cozy in their chairs, waiting for brave poets to “bare their souls” through spoken word. Each pair of ears was perked and ready to learn.

It was the poetry slam hosted by the LEXengaged Living Learning Program on Wednesday night in Patterson Hall.

LEXengaged wanted the night to be about identity and diversity. The group believed that giving students a place to express their vulnerable selves would be a good opportunity not only for them but for others as well.

“It’s really to share stories because I think that’s how we learn about one another,” said Victoria Cruz-Falk, a LEXengaged peer mentor. “We, as the LEXengaged Living and Learning Program, have had the opportunity to get to know one another’s stories and I think that’s how we grow, and going outside of that and taking our stories to other people, inviting people to come this, not a safe space, but brave space.”

Josh, who was the emcee for the night, started the evening with a poem of his own. He is part of the LEXengaged LLP and actually came up with the idea of the poetry slam for the LLP’s end-of-year wrap up. He recited a piece he wrote the night he came out as gay to his father. Josh also shared about facing dejection from that coming out and being biracial. Though his piece didn’t have a title, he punctuated it with raw emotion and firm conviction.

The lack of restricting titles seemed to be a common theme for the event. Of about 20 poems performed, only a few had titles. However, all of them had powerful messages and moved the audience. Subjects ranged from parental abuse to heartbreak, and many poems explored the sense of identity. LEXengaged and audience members recited poetry, along with pre-recorded anonymous submissions. There was even an improvisation inspired by the other recitations. Instead of the classic snap response to poetry, Patterson Hall rang with full applause after every poem.

Melyk Walker, a sophomore audience member, said the poetry slam “broke” the expectations he had after watching a satirical rendition in “22 Jump Street.” The relatability of the poems was what really struck him.

“It just felt really powerful, didn’t feel fake. It felt like they really expressed their emotions through the crowd,” Walker said.

What Walker took away from the event was exactly what the LEXengaged LLP wished for. Josh was insistent that the stories of minorities need to and should be heard, especially on UK’s campus, and the poetry slam was the perfect place to do it.

“I wanted people to hear my story,” Josh said. “That’s what I base my entire life on, making sure people hear my experiences because that’s something we don’t usually hear.”