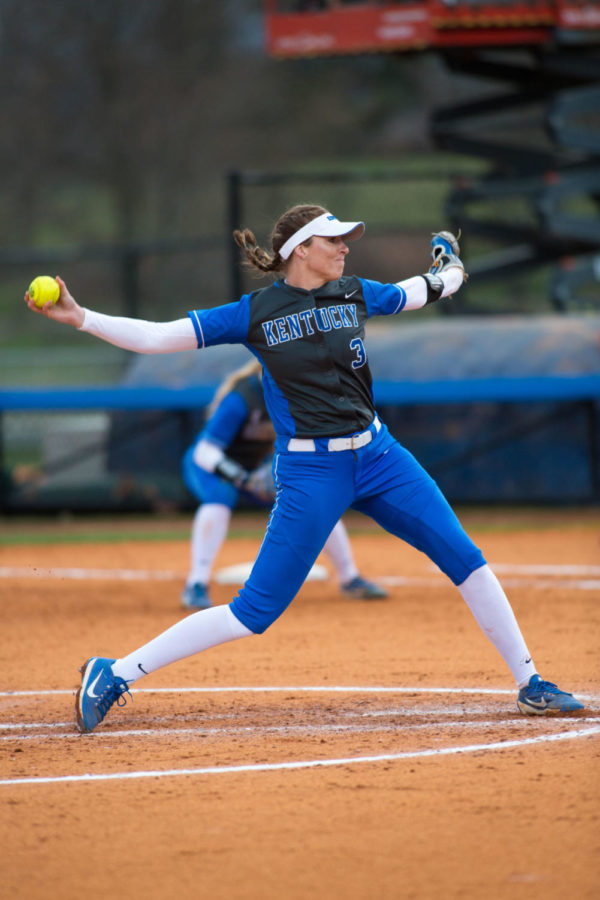 University of Kentucky freshman Grace Baalman pitches during the home opener against the University of Dayton on Thursday, March 1, 2018 in Lexington, Ky. Photo by Jordan Prather | Staff

Game three of UK Softball’s series against the University of Alabama didn’t go in the Wildcats’ favor as they took a 9-3 loss to the Crimson Tide.

Alabama found its hitting stride early and scored two runs in the first inning and six runs in the second.

Autumn Humes was the starting pitcher for the Cats, but coach Rachel Lawson decided to make several early pitching changes. Erin Rethlake entered the game to start the second inning, but Humes re-entered with one out in the second.

Grace Baalman also entered the game to pitch in the second inning and finished out the rest of the game, giving up only one run.

“I thought Grace was really good today, especially after throwing so many pitches yesterday and doing such a good job against their lineup,” said Lawson. “For her to come in and only give up the one run in her innings really says a lot about her toughness.”

While Alabama hit its stride at the plate early, Kentucky didn’t find its until the bottom of the third when the Cats came up with two big hits from Alex Martens and Brooklin Hinz.

Martens had an RBI double to center field that scored Rethlake, while Hinz singled to right-center but advanced to second on an error by Alabama’s center-fielder. Hinz’s hit scored Martens and pinch runner Hannah Huffman.

“Had everyone played the way Brooklin did, we might’ve had a different outcome. I mean she made outstanding catches in left field, she did a great job coming in driving in the RBIs,” said Lawson. “Alex struggled at the plate yesterday, and I think it was great to see her turn around and do a good job.”

After Kentucky’s runs in the third inning, there would only be one more run added to the scoreboard, which was by Alabama in the top of the seventh inning.

The Wildcats look to bounce back from today’s loss on Wednesday when they take on the University of Louisville at home at 7 p.m.